Disclaimer: I got this book for free.

“The Impostor’s Daughter: A True Memoir” by Laurie Sandell tells her coming of age story in the shadow of her father. The book is in a graphic memoir (read: comic book format) and seems to be poignant and honest. 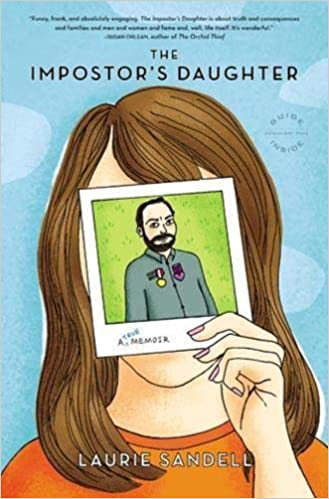 We meet Laurie as a young girl who is enamored by her father’s tales of self-glorification. However, unlike the character of Ed Bloom Senior in the wonderful story “Big Fish”, Mr. Sandell actually believes his own propaganda. Laurie’s father doesn’t do anything to dispel his daughter’s adoration (but let’s be honest, which father would?) and spoils little Laurie to no end.

Fast forward several years – Laurie is now 21, she is working and trying to establish a credit history only to find out that her father opened up, and maxed out, credit cards in her name. Furious she confronts her family only to discover that they don’t care or don’t want to believe that the family’s patriarch is nothing but a small time con-man.

Laurie becomes a celebrity interviewer for a famous magazine and as a side gig interviews her father for a feature she plans on writing. However Mr. Sandell’s stories fall apart after Laurie does some fact-checking and finds out that Mr. Sandell puts The Baron Munchausen to shame.
In the meantime Laurie becomes drug dependent, a part of an on again / off again long distance relationship with a man among other personal issues big and small.
How she deals with these issues?
Will some, if any, get resolved?

The latter part of the book is complex and interesting. The vivid imaginary in the panels as a direct and opposite correlation to the dark story told is bold, striking and thought provoking. Ms. Sandell goes through a lot of trouble to make sure the reader knows that many of her stories are on-the-record, such as pointing out when a tape recorder is present and presenting the reader with hints of actual documentation.

The characters are not as flushed out as in a novel, the father is always present but we really don’t know anything about him besides his stories, the Sandell sisters are simply “there”, Mrs. Sandell seems to get deeper treatment and Ben, Lauries’ boyfriend, seems like a good guy with few faults. That being said, in the graphic novel format Ms. Sandell chose to tell her story this sort of character development works and you’ll get to know the characters a bit better by paying attention to the drawings in context with the words.

Ms. Sandell, to her credit, did not make her own character very likeable or sympathetic. Abusing sleeping pills, drinking too much, worrying about uncontrollable aspects of her life and worshiping celebrities almost sounds like a cliché I found myself thinking “would you grow up already”.

But maybe that’s the point.

I was hooked on the first few pages of the book, the art is wonderful, the story is told through a very personal point of view and the format is engaging. Even though the book could be complete fiction I don’t think it is. Ms. Sandell is not exactly an unknown in the publishing world and publishing a work of fiction, passed out as a memoir, would do great harm to her hard earned reputation.

Please leave a comment with your thoughts about The Impostor’s Daughter, or just to say hello.

The Impostor’s Daughter: A True Memoir by Laurie Sandell