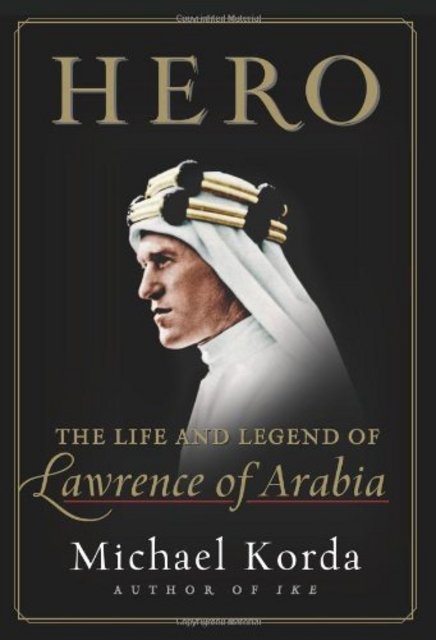 About:
“Hero: The Life and Legend of Lawrence of Arabia” by Michael Korda is a biography of Englishman Thomas Edward (T.E.) Lawrence better known by his nickname. The biography follows Lawrence from his birth to his early death.

Mr. Korda does an excellent job examining the different, often contradictory, sides of this complex man. Lawrence was an Oxford educated scholar with special interest in archeology and an imperialist, but he was also a ruthless warrior who supported a revolt against the empire. Fighting against the Turkish Ottoman rule Lawrence acted in a brave fashion which could also be described as fanatic and quite irresponsible. T.E. Lawrence was a sexually repressed vegetarian who would eat meat not to insult his Arab hosts, hated physical contact but didn’t flinch when charging the enemy. 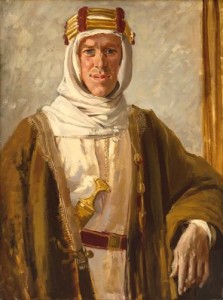 “detractors and admirers alike tend to dissect his personalty into thin slices, separating the soldier form the scholar, the hero for the teller of tall tales, the victim of neuroses from the moan of action, and in the process losing sight of just what an attractive and interesting person he was.”

The author does an excellent job brining the reader the many sides of Lawrence, from admiration “cool judgment under fire” to the introducing a complex man, depressed, shy but certainly eccentric.  The T.E. Lawrence we learn about has “found himself in part of the world where his taste for sweet things and his dislike of alcohol were shared by most of the local population“.

Mr. Korda does a wonderful job describing Lawrence’s harassment and sabotage campaign (basically hit and run tactics) using a small force which, by nature, was much more mobile than the Turkish standing army. A poignant part of the book comes when describing Lawrence’s capture, torture and rape by the Turks. This was a life changing event for Lawrence and the humiliation he felt for enjoying the rape has haunted him to the end. Michael Korda treats this pivotal occurrence in Lawrence’s life with sensitivity and seriousness it deserves.

The transformation of T.E. Lawrence into the mythical Lawrence of Arabia mostly by Lowell Thomas is also a part of the story. However the author is quick to point out that the lure of his character does not overshadows Lawrence’s real achievement, such as pioneering a new kind of warfare and his pivotal rule in creating three Middle Eastern kingdoms.

Synopsis:
T.E. Lawrence was the illegitimate son of an Irish landowner who ran off with the family governess, Sarah Lawrence. They settled in Oxford, England using her name and brought up five sons, Thomas Edward being the second. From the start his mother had a difficult time accepting that Thomas will be different. 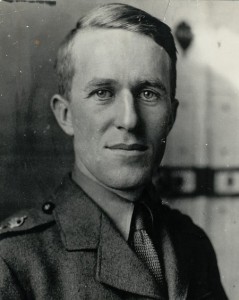 Thomas got interested in medieval architecture and toured studying castles all over the world on many grueling journeys, walking alone much of the way. As World War I broke out, Lawrence’s knowledge of the Ottoman Empire ensured him a post as an officer in Egypt and he quickly became the link between the British and the Arab revolt and becomes known to the world as Lawrence of Arabia.

BOOK BLOGGERS – Have you read “Hero: The Life and Legend of Lawrence of Arabia”? If so link up your review below