Few people in America knew who Tadamichi Kuribayashi was before Clint Eastwood’s heartrending film, Letters from Iwo Jima.  They wouldn’t have known by name that Kuribayashi, ultimately, was the man responsible for one-third of the deaths in the Marine Corps in the Pacific theater of World War II. 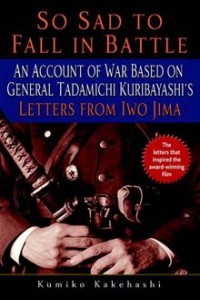 So Sad to Fall in Battle is available on Kindle, hardcover, and paperback.

Letters from an unorthodox general

Eastwood’s work (which is based on freelance author Kumiko Kakehashi’s book So Sad to Fall in Battle) makes clear that Kuribayashi was no ordinary soldier.  Interviews with widows of long lost soldiers and the very letters and pictures that Kuribayashi penned to his dying day reveal a man unlike any American-held stereotype of a WWII-era Japanese.

Far from the suicidal fanatics portrayed in Hollywood (who did, admittedly, exist, though in greater complexity than typically believed), Kuribayashi refused to allow his subordinates to execute banzai charges.  Where many superiors in the Imperial Japanese Army and Navy were hyper-sensitive to class distinctions and made their disdain corporally known to all inferiors, Kuribayashi held the view that his men were not expendable.  He ate the same rations as his men, drank the same water collected in rainstorms, and walked every inch of his battlefield to craft his brilliant strategy.

He did not even hate Americans with the same vehemence as many others in his station.  In fact, he respected and feared them, having trained with Americans in the 1920s and taken noted of the country’s superior numbers and military might.

He therefore knew his days on Iwo Jima would be his last, but it did not deter him from writing caring, thoughtful letters home.  His letters—featured heavily in Kakehashi’s book—indicate that the general remembered and regretted even the smallest details, like not fixing the draft in the house before leaving his wife and two children.  Even as the battle heightened and Kuribayashi was offered a safer post on a nearby island, however, he stayed to die at their side.

One of his men

It is perhaps that Kakehashi is a civilian and not a military historian that makes this book particularly stirring.  She spends little time discussing the battle itself, instead describing in tragic detail the hunger and desperation of the soldiers and the loyalty, respect, and love Kuribayashi held for and received from every one of them.  He commanded respect because he gave it to everyone, from lowly draftees who had yet to bed their first woman to the members of the upper echelons who assigned and later abandoned him—undermanned, undersupplied, and undernourished—to a forsaken speck of volcanic rock in the middle of the Pacific.

The tenacious United States Marine Corps planned to take Iwo Jima in 5 days; Kuribayashi waged deadly insurgent warfare that made them fight 36.  The US military never identified his body; he had stripped himself of all insignia and rank prior to the final assault.  As he lived, he died—equal to his men.

Racial, cultural, and war-derived stereotypes have no place in this book, which effectively eradicates all preconceived notions of the battle in the Pacific through a deftly woven portrait of a worthy adversary Americans never got to know.

So Sad to Fall in Battle is available on Kindle, hardcover, and paperback.

Charissa  is a writer and manager for accountingdegree.net, where she has recently been researching online accounting school. In her spare time, Charissa enjoys gardening and v