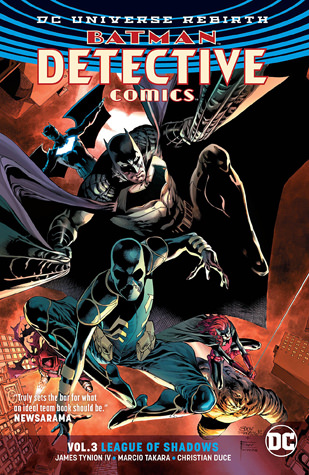 Thoughts:
I really believe that Batman Detective Comics (Rebirth) Vol. 3: League of Shadows by  James Tynion, IV is one of the best graphic novels I read in the last few years. The team Batman put together of Batwoman (Kate Kane), Azarel, Batwing (Lucas Fox), Clayface (Basil Karlo), and Orphan (Cassandra Cain) is really coming together cohesively and make for an excellent, character driven storyline.

This book is focused on Orphan, Cassandra Cain, daughter of assassins who was brought up to be a living weapon, and the new/old Batgirl. Orphan is my favorite character of the new Bat-people lineup, she has a great background story and is an all-around great character.

Mr. Tynion has done a fantastic job on this issue, he raised the story and team building to another level. While the book certainly focuses on Orphan, several other characters, like Kate Kane’s Batwoman and Clayface who get a chance to develop as well.

Like any good tale, the villain is the one that drives the storyline. Lady Shiva and the League of Assassins are formidable adversaries to the team and I hope to see more of them in upcoming graphic novels.

The most impressive thing about this graphic novel was that with such a big story, with many moving parts, the writer has managed to stay away from the deus ex-machina trap and have the characters all stay true to form. They are moving pieces on a chessboard, each acts true to their written persona.
Good luck with Vol. 4, it’s going to be difficult to top this one.

Synopsis:
The League of Shadows, previously thought to be a rumor, is taking over Gotham City. The League is destroying Batman’s allies one by one.

Lady Shiva has come back to claim her daughter, Cassandra Cain, Orphan, but if she can’t Lady Shiva will destroy her. Meanwhile we learn more about Orphan, her history and dreams.