Tomorrow is the birthday of English poet William Wordsworth (7 April 1770 – 23 April 1850). Wordsworth’s semi-autobiographical poem The Prelude (buy in paperback or electronic format for $1) is considered his masterpiece among poetry scholars. 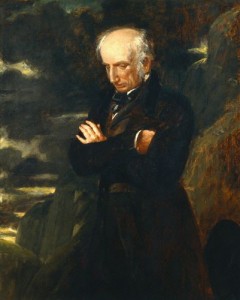 2 )      Wordsworth is credited with launching the Romantic Age.

3 )      In 1792 Wordsworth met John “Walking” Stewart in Paris. The English philosopher made a deep impression on the poet and had major influence on his works.(Stewart was close friends with Thomas De Quincey, Thomas Paine, and Platonist Thomas Taylor).

5 )      Wordsworth’s popularity was so great in the late 1840s that his home in Grasmere became a tourist attraction. Mary Wordsworth, wrote:

“”At this moment, a group of young Tourists are standing before the window (I am writing in the Hall) and Wm reading a newspaper—and on lifting up his head a profound bow greeted him from each.”

6 )      William and his daughter Dorothy (who was an author, poet and diarist by her own right) liked to lie down next to each other outdoors and pretend that they were lying in their graves.

7 )      Critic Francies Jeffrey was not too fond of Wordsworth’s work. His review of The Excursion, a long poem published in 1814, started by saying “This will never do.”

8 )      At a dinner party at home of poet Charles Lamb, Samuel Taylor Coleridge (another English poet) sat at one end of the dinner table talking about Wordsworth poetry while the man himself was sitting at the other end…also talking about his own poetry.