Today is the birthday of Pulitzer prize winning American author Willa Cather (7 December, 1873 – 24, April, 1947). Even though Cather is associated with the pioneer spirit, she lived most of her life in New York city. 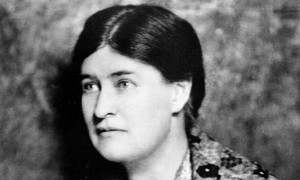 1 ) Ms. Cather often lied about the year she was born in.

2 ) Despite her mother’s attempts to turn her into a “lady”, young Willa cut her hair and wore trousers, despite the norms at the time.

3 ) While attending the University of Nebraska, Ms. Cather dressed as a man and called herself “William”, her fictional twin brother.

4 ) Cather worked at McClure’s magazine as a managing editor. Author Sarah Orne Jewett advised her to quite her job and pursue writing.

5 ) Many of Cather’s characters are inspired by people she met in her youth.

6 ) Edith White and Willa Cather were in a relationship for 40 years. It is still unknown whether Cather was a lesbian or not (although there are subtexts in her writing which give us strong hints).

7 ) Cather’s name is associated with the pioneering spirit of the American West.

9 ) During her career Willa Cather enjoyed popular as well as critical success.

10) A portion of protected land the “Willa Cather Memorial Prairie” in Nebraska.

This post was orginially published as: Fun Facts Friday: Willa Cather on 7 December, 2012