Today marks the burning down of the historic Globe Theatre in London, 1613. The theatre was built by Lord Chamberlain’s Men, part of which was, of course, William Shakespeare. 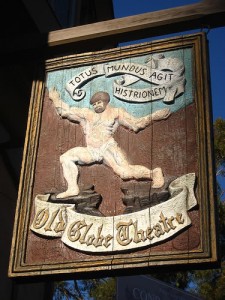 1 ) The Globe was built in 1599 from the timbers of London’s first permanent theater – Burbage’s Theater.

3) Theaters in the Elizabethan era were also used for gambling, prostitution and… bear baiting.

4 ) There were actually two Globe Theatres, the second one built in 1614

5 ) After collecting money for admission, the collector’s put their boxes in a room backstage – the box office.

6 ) Flags were used to tell the audience what the genre of the play will be. Black was tragedy, red was history and white signified comedy. Flags used as advertising were also displayed.

7 ) The Globe was built by carpenter Peter Smith and his men. At the time it was the best theater in London.

8 ) The theater crest, positioned above the main entrance, depicted Hercules carrying the globe on his shoulders with the motto “Totus mundus agit histrionem” ( the whole world is a playhouse). William Shakespeare used it in As You Like It “All the world’s a stage”. The play was performed in The Globe.

9 ) The theater did allow for special effects to be shown. Firing of cannons, smoke, fireworks and rigging for “flying” were all part of the show.

10) On June 29, 1613 during a performance of Henry the Eighth a theatrical cannon misfired igniting the wooden structure.