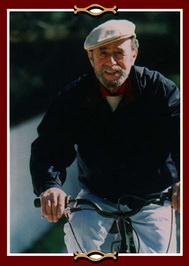 2)      He discovered his interest in magic as a young boy, and held onto that fascination his whole life. Mr. Fleischman started performing as a professional magician while still in high school.

3)      The first book Mr. Fleischman published was Between Cocktails, when he was 19 years old. The book was a guide to perform magic with paper matches.

4)      During World War II Mr. Fleischman served in the Pacific theater on a destroyer.

5)      In 1987 Mr. Fleischman won the Newbery Medal for his book The Whipping Boy, and in 1994 was the US nominee for the Hans Christian Andersen Award.

6)      Drawing on his experience in the Pacific, as a reporter, and as a magician, Mr. Fleischman wrote many adventure novels which were set in the Far East.

7)      His book Blood Alley was developed into a film starring John Wayne and Lauren Bacall. Mr. Fleischman wrote the script and began his long relationship with Hollywood.

9)      Paul Fleischman followed his father’s footsteps to writing children’s books. At the time of this post, they are the only parent and child to win the Newbery Medal.

10)   Besides a lifelong interest in magic, Mr. Fleischman also wrote about gardening, astronomy and classical guitar.