American author Shirley Jackson (14 December, 1916 -8 August, 1965) born on this day. She is best known for her excellent short story The Lottery. 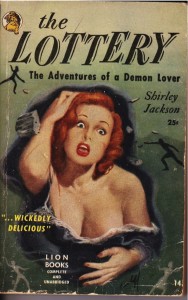 4 ) When The Lottery was published in The New Yorker (26 June, 1948) many readers cancelled their subscription in anger.

5 ) South Africa banned The Lottery all together. Jackson took it as a compliment.

7 ) Jackson, a housewife as well as a writer, said that writing is “the only way I can get to sit down.”

8 ) Jackson died of heart failure, thought to be brought on by smoking and weight issues.

9 ) In 2007 the Shirley Jackson Awards were established. The prize is awarded in several categories (short fiction, novellas, etc.) to stories in horror , the dark fantastic ,and psychological suspense.

10) Stephen King wrote: that “there are few if any descriptive passages in the English language that are any finer than this; it is the sort of quiet epiphany every writer hopes for: words that somehow transcend the sum of the parts.” About the opening paragraphs of The Haunting of Hill House.