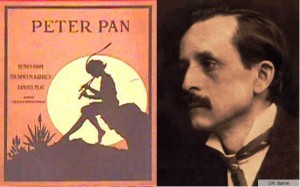 1 ) Barrie always wanted to be an author but his family was against it. His conservative Calvinist family wanted him to enter the ministry and used guilt on him by telling that it what his older brother David, who died two days before his 14th birthday in an accident would have done. Barrie agreed to go to the University of Edinburgh but study literature.

3 ) Barrie’s The Little White Bird (serialized in the US, published as a single volume in the UK), marks Peter Pan’s first appearance.

4 )  The original title of Barrie’s most enduring work is Peter Pan, or The Boy Who Wouldn’t Grow Up, originally written as a play in 1904 and a novel in 1911.

5 ) Barrie used the name Wendy for the play’s heroine because Margaret Henley, a young girl who he befriended, called him “fwendy” (friendly). Sadly Margaret died at age five of cerebral meningitis.

6 ) George Bernard Shaw called Peter Pan “ostensibly a holiday entertainment for children but really a play for grown-up people” (he was talking about the play).

7 ) Barrie bequeathed the copyright of all Peter Pan works to the Great Ormond Street Hospital, a children’s hospital in London.

10) Barrie also befriend explorer Robert Falcon Scott. During his final hours at his South Pole expedition, Scott wrote to Barrie asking him to take care of his wife and son (Barrie’s godson). The proud author carried the letter on his person for the rest of his life.