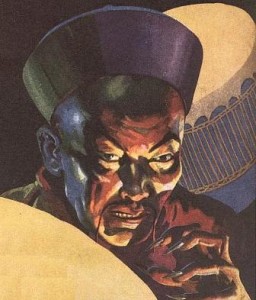 1 ) The Insidious Dr. Fu Manchu, the first book in the series, is actually a collection of short stories. The novel was originally called The Mystery of Dr. Fu-Manchu but the title was changed when released in America.

2 ) Fu-Manchu’s goal is to restore the Chinese Empire to its former glory. Even though he uses some despicable and cruel methods, the book does show him as a benevolent man who uses compassion as well as ruthlessness.

3 ) When MGM adapted The Mask of Fu Manchu in 1932, the assembled group of Asian villains (Chinese, Persians, Indians, Arabs) stated that they must “kill the white men and take their women”. The statement prompted a group from Harvard to petition MGM to stop from making further films based on the novels.

4 ) Before the US entrance to World War II (around 1940), the State Department asked MGM to stop making future films starring Fu-Manch. This was because China was an ally against Japan.

5 ) Once the US entered World War II the books’ publisher, Doubleday, ceased publication of the series for the duration.

6 ) The author, Sax Rohmer, stated in his biography that “Of course, not the whole Chinese population of Limehouse was criminal. But it contained a large number of persons who had left their own country for the most urgent of reasons. These people knew no way of making a living other than the criminal activities that had made China too hot for them. They brought their crimes with them.”

7 ) Until his death, Rohmer insisted that he based Fu—Manchu or real Chinese criminals.

8 ) Some villains that Fu-Manchu have inspired include Ming the Merciless (Flash Gordon), Dr. No (James Bond), The Celestial Toymaker (Doctor Who), Dr. Zin (Johnny Quest) and Lo-Pan (Big Trouble in Little China).

9 ) The facial hair which was featured on the villain in the movies became known as the Fu Manchu mustache.

10) The character seems to have resonated with audiences and made appearances in movies, TV shows, music, radio, graphic novels and even had his own candy bar appropriately named “Fu Munchews”.