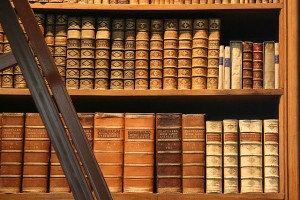 By Matl (own work (photography)) [CC-BY-SA-3.0
(www.creativecommons.org/licenses/by-sa/3.0)], via Wikimedia Commons

This week is National Library Week (April 10 – 16, 2011) sponsored by the American Library Association (website | Twitter | Facebook). Pub­lic libraries are some of the few pub­lic build­ings the pub­lic actu­ally uses. Whether you are rich or poor, edu­cated or not and no mat­ter to which polit­i­cal party you donated to, you are always wel­come at your local library – they are the great equal­izer of our society. Probably due to that fact, libraries have been bombarded with budget cuts all over the world (but that’s OK as long as the politicians get a raise for the mass they created).

National Library Week has been around since 1958 and some schools make it National Library Month. If you haven’t been to the library recently I encourage you to do so. A day at the library is a “fun day” in our house – the library provides games, the kids can play, read some books, flutz around on the kids’ computer and all for free.

The librarians are always very helpful, even I, who has been in the IT industry for over 20 years, acknowledge their superiority over Google when it comes to finding relevant information. Check out my thoughts on “This Book is Overdue” by Marilyn Johnson or better yet, go to your library and check it out for yourself.

1. The library of Congress is the largest library in the world.

2.The names of the two stone lions in front of the New York Public library are Patience and Fortitude. They were named by  mayor Fiorello LaGuardia.

4. During the war of 1812 the British burned the library of Congress. In 1815 Congress purchased 6,487 books from Thomas Jefferson’s personal library for $23,950 and restarted its collection.

5. Libraries do not accept Advanced Reading Copies (ARCs) for their collection in part because they cannot catalog them.

6. The first successful lending library in America was The Library Company of Philadelphia . The library was founded by Benjamin Franklin.

7. The Library Company of Philadelphia still exists; you can visit them at 1314 Locust Street, Philadelphia, PA.

8. Franklin’s library wasn’t free though, you had to pay two pennies to borrow a book and got one penny back when you returned it.

9. The Royal Library of Alexandria in Egypt was supposedly the greatest library in the ancient world and had an extensive collection of books and scrolls as it was charged with collecting all of the world’s knowledge. However the library was thoroughly destroyed in a fire and no index survived – so we’ll never know.

10 There are an estimated 122,101 libraries in the United States today, which includes all kinds of libraries (public, school, government, etc.). Doesn’t that make you proud?

Article Name
Factual Friday: Libraries
Description
Pub­lic libraries are some of the few pub­lic build­ings the pub­lic actu­ally uses. Whether you are rich or poor, edu­cated or not and no mat­ter to which polit­i­cal party you donated to, you are always wel­come at your local library
Author
Man of la Book
Publisher Name
Man of la Book - A Bookish Blog
Publisher Logo