About:
Cosmos: Possible Worlds by Ann Druyan is a sequel to Carl Sagan’s classic, and a companion book to the celebrated television series. Ms. Druyan is an award winning writer, director, and producer specializing in making science accessible. 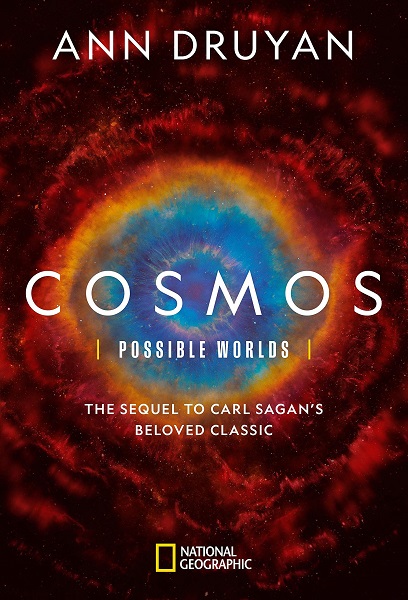 Thoughts:
The first think I noticed when holding this book is the quality of the item. The book is lavishly printed, quality pages and magnificent photographs throughout. Cosmos: Possible Worlds by Ann Druyan consists of 13 chapters, all are separated subjects and need not to be read in order. I found the chapters to be fascinating and approachable, explaining scientific concepts in an easy to read, open-minded and welcoming manner for all ages.

What surprised me about this book is that the author doesn’t just delve into the mysteries of the cosmos, but also has chapters explaining the roles of giants of science many have never heard of, and their immense contribution which led to other giants of science building upon them. My favorite chapter, strikingly, was about Nikolai Vavilov, a scientist from Russia. Vavilov was a botanist, a discipline I have no interest in, who collected specimen from around the world of agricultural plants. Eventually Vavilov’s skills would help create a center for agricultural plants. The scientist soon fell out of favor with the Stalin administration due to Trofim Lysenko, a believer in pseudoscience who convinced the all-powerful leader that Vavilov was working against the best interests of the Russian people. Subsequently, the botanist was arrested and sentenced to death. In the 1960s Vavilov was posthumously pardoned by Khrushchev, and is considered one of the heroes of Soviet science.

As I mentioned, there is not cohesive narrative to this book, every chapter is its own entity and could be read independently, and out of order. Many times this type of structure doesn’t work for me, but it does in this book. Could be that I can only take scientific subjects in small doses, or that the book combined history and science, telling fascinating stories just enough to make a point. Whatever it was, I found it to be an intelligent, beautifully printed book that I can share with my teenage children.

Zohar — Man of la Book
Dis­claimer: I got this book for free from TLC Book Tours
*Ama­zon links point to an affiliate account