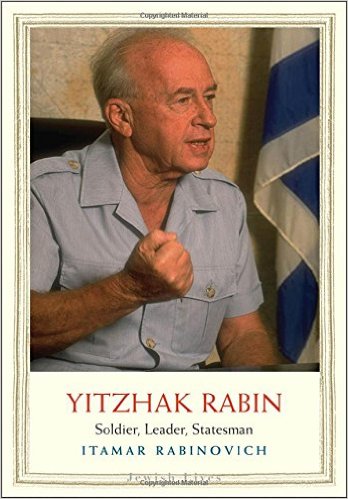 Thoughts:
Yitzhak Rabin: Soldier, Leader, Statesman by Itamar Rabinovich is a biography of the Israeli persona, an account of Mr. Rabin’s career and life as a solider and statesman. Mr. Rabinovich worked with Mr. Rabin late in his career and even held the same post, that of Israel’s ambassador to the United States.

The book’s most impressive part comes as a first-person account of Mr. Rabin’s second term as the Israeli Prime Minister. The author was witness to history and his narrative is fascinating, the insights are thoughtful , and the deductions are enlightening.

I still remember the day that Mr. Rabin passed away from an assassin’s bullet. I was not in Israel, but on a comfortable couch in New Jersey, however I felt as if I was in another world. After all Israel, “the light to be cast unto the nations” as David Ben-Gurion (Israel’s first Prime Minister) said, is not a country where political leaders are assassinated. At the time no one understood how such a tragedy could happen. A Jewish Prime Minister, assassinated by a Jewish man, in a Jewish state, surrounded by bodyguards and an adoring crowd.

Mr. Rabinovich wrote an outstanding summary which attempts to inform the reader of the complex circumstances which allowed a man to feel as if he was permitted to pull the trigger and murder a person in cold blood. Putting his emotions to the side, the author’s analysis is straightforward and thoughtful.

The author talks about Mr. Rabin’s many achievements, as well as his failures, his personality traits (both positive and negative), and the person he was, not just the public figure. The book is engrossing and an important primary source for future generations to study.