The Ninth Metal by Benjamin Percy is a science-fiction book, the first one in The Comet Cycle series. Mr. Percy is a published author and writer of fiction and non-fiction articles, as well as some of my fantastic comic-books. 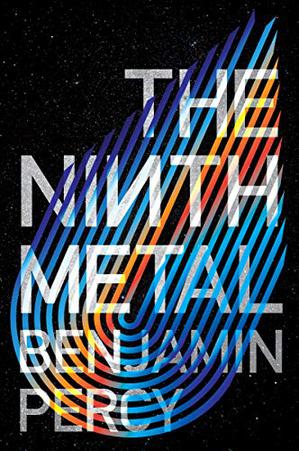 This book has a lot going for it, police drama, corporate intrigue, murder, action, a new kind of tortured super-hero, as well as the effects of a new type of gold-rush on a small community. The Ninth Metal by Benjamin Percy, a science-fiction drama, has roots in Samurai stories and its extrapolations of westerns and super-heroes.
And it works!

The book starts a bit slowly, there are several characters which the story follows and have an impact on the narrative. One would expect that will all it encompasses in themes and characters, the story-line would be a complete mass. It is not, however, the narrative flows smoothly and flawlessly.

Characters driven to extreme, doing things they know are wrong is a most important theme. Something which, generally, many people can identify with. Stacey is a rookie cop, a wholesome lady who changes as the story goes along. Victoria taken a job torturing a kid “for science”. Sworn to secrecy under penalty which, at best, will end in a very long jail sentence.

Mr. Percy is a fan of the genres mentioned before, as well as comics (the book is dedicated to such giants as Jack Kirby and Stan Lee). One of the characters is a comics fan, and was chiefly influenced by Batman – but who hasn’t?

Omnimetal is a major part of the story, nevertheless we don’t hear much about it. We know it appeared trailing a comet, and furthermore has special properties. This omission, is fine, by all means, it’s better than some pseudo-science mambo jumbo.

All in all, the novel was an unexpected, very pleasant read. Although this was the first book of a planned series, it’s a complete story and does not end with a cliffhanger. The bar, however, has been set high for the next books.

A meteor shower in Northfall, Minnesota destroyed most of the area. Homes and forests were destroyed, new craters and other geographical features were created.

The meteor shower brought with it a new kind of metal called onmimetal which can be used as an energy source or be weaponized. Almost overnight the small, sleepy town became a hub for mining companies, new millionaires abound, and all the corruption and treachery that comes with new riches.

The Ninth Metal by Benjamin Percy