The Fire and the Darkness: The Bombing of Dresden, 1945 by Sinclair McKay tells about the extensive barraging of the city by the Allies during World War II using firsthand accounts of those in the air and on the ground. Mr. McKay is an author and reporter from England. 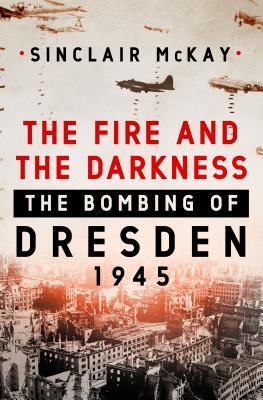 I have always heard about the fire-bombing of Dresden, but the even never got more than a chapter (at best) or so in all the books I read. After reading The Fire and the Darkness: The Bombing of Dresden, 1945 by Sinclair McKay I realized how devastating, and what a huge operation, it must have been.

The raid took place in 13 February 1945, I never realized the scale of it 244 bombers dripping 880 tons of bombs. The attack was done in waves, even though the majority of the damage was, as expected, on the first wave. Two waves were by the Royal Air Force (RAF), one of the waves was 120 miles long, the other two were done in daylight by the American Army Air Corps.

The citizens of Dresden were sure they were mostly safe due to the historical nature of the city and its treasures. However, it was more important to the British High Command to make a point and try to demoralize the German population, even though the bombing seemed to have to opposite effect.
It also didn’t help that Dresden enthusiastically embraced the Nazi anti-Semitic and racial ideology and laws.

The author spends the first half of the book introducing the readers to the people he follows. Residents of Dresden, both prominent and regular citizens as well as Werner Klemperer who stayed in the Jewish area (having been forced the day before the bombing to deliver transport orders to other Jews) and POW Kurt Vonnegut who would go on to fictionalize his experiences in Slaughterhouse-Five. The author also follows the bomber crews and the terrifying experiences they had in the European skies.

The author does not shy away from the controversy surrounding the bombing. Was it necessary? Was it a war crime? A crime against humanity? How did the people who ordered the bombing as well as those executing the orders deal with the morality of it?
Mr. McCay does not take sides, but let his subjects speak for themselves. He does observe that maybe, after years of war and millions and millions dead, maybe the bombing of cities was done simply to make the other side stop.

This is a very interesting and lively read, Mr. McKay writes with passion and care. The author creates a memorable, fascinating, and easy to understand narrative about a complicated subject with his still being revisited these days.

Buy The Fire and the Darkness from Amazon.com*
More Books by Sinclair McKay*

The Fire and the Darkness: The Bombing of Dresden, 1945 by Sinclair McKay