About:
The Faithful Spy by Alex Berenson is a novel following a man who was a CIA asset in al Qaeda. The novel takes place in Afghanistan and the United States. 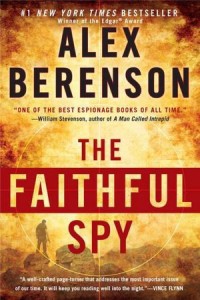 My rating for The Faithful Spy – 4

Thoughts:
After finishing to read The Faithful Spy by Alex Berenson (website | Facebook | @AlexBerenson) I added Mr. Berenson to my favorite authors list immediately. The novel grabbed me from the first several pages and didn’t let go until the last sentence.

Mr. Berenson is a superb storyteller and describing details which lets you feel the story and immerse yourself in it without any superfluous descriptions. Even though this story tells of a man deeply embedded with al Qaeda, I thought that it was a modern American western – the type which legends are made of.

The comparison to an American western comes with flaws of course, a lot of chest thumping, the justification of torture (as long as it’s done by the good guys) and abandoning the gray areas which make up most of our lives, especially those in espionage and the mark of a good spy novel.

It is difficult to write a spy novel which deals with terrorism and Islamist extremists, mostly because we do not have the ability to understand the enemy and the thousands of years of culture behind them which make them act a certain way.  Unlike other spy novels taking place in more traditional times (the Cold War for example) where our enemy was almost a mirror image of us – even though we justified it to ourselves that we were the good guys and they were, of course, simply wrong.

The novel is divided into 2 parts, “The Homecoming King” which is absolutely brilliant and “The Believers” which is very good, but not as good as the first part. The “ticking bomb” scenario at the end is a bit stale, something most action novels have, but it is very well written.

In Part 1 the reader gets a deeper understanding of Islamist fanatics, even though this is a novel it seemed to me that the author did his research and managed to present it in an informative, interesting way which will lead one to better understand the world’s headlines. The protagonist’s return to America, after absences of a decade living with deeply devout Muslims, is an amazing analysis of a man between two worlds who is trying, unsuccessfully, to merge them both together. He is seeing his beloved country, its decadence and decay, with new eyes and a fresh perspective.

Part 1 could have been a whole book all by itself. If you ever left your childhood town, only to return a few decades later, for better or worst as a stranger, you will somewhat understand how John Wells sees the US when he comes back. The memories, remembered through a rose colored filter, are shattered. The absence of shame and decorum are a slap in the face to a man who has fought hard for “our way of life”.

I am looking forward to read more of Mr. Berenson’s novels, he is obviously capable of literary excellence as he proved in part 1 of this novel. Maybe he had some bad advice on the second part, maybe he was in a rush or merely just succumbed to the pressures of commercial success. However, that is all conjecture on my part and certainly unfair to the author who has shown great talent.

Synopsis:
John Wells is the only CIA agent managed to infiltrate al Qaeda, in the process he has become a faithful Muslim but still an American patriot. Understandably, John’s al Qaeda bosses don’t fully trust him, but as a result of his long absence and finding a new religion, his CIA bosses don’t trust him either.

Trying to prove himself as a patriot and foil the next big attack on American soil, John puts himself on the line of fire, together with an al Qaeda cell while trying to evade the CIA who will bring him in.

BOOK BLOGGERS – Have you read The Faithful Spy? If so link up your review below: