The Circle by Dave Eggers is the first book in The Circle series in which the world’s most powerful internet company is working towards connecting the whole world, no secrets allowed. Mr. Eggers is a published author and literary award winner, founder of McSweeney’s, and an independent publishing company. 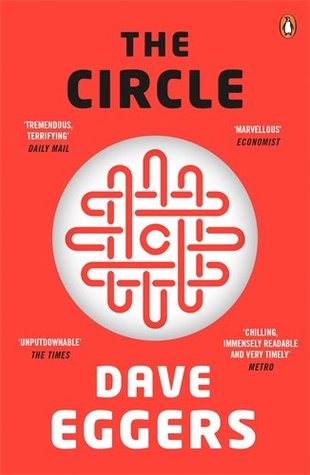 My rating for The Circle – 5
Buy The Circle from Amazon.com*
More books by Dave Eggers*

Even though The Circle by Dave Eggers was published in 2013, it’s still relevant today. An impressive feat since it deals with technology, which as we all know changes very quickly.

The Circle, a social-media company that could certainly be a combination of Facebook and Google, is intent on dominating the lives of people. The company, which could be considered a cult, wants to make the entire world transparent. According to them, this will eliminate crime, and secrets, as well as increase accountability. They start with their own employees, giving them everything they ever dreamed of, but asking for complete loyalty in return.

As with almost everything in life, moderation is the key. While transparency is great, everyone knowing everything you do is not something we aspire to. This is especially true when one is dealing with private moments, such as grief or pleasure.

Mr. Eggers explores this notion, taking surveillance capitalism to its limits, where nothing is sacred. One’s wishes are ignored, and the right to be forgotten simply doesn’t exist. On the way, along with privacy issues, he explores the history, democracy, how and what we remember, as well as human knowledge and its limits.

Even the protagonist, Mae Holland, who embraced the idea of transparency soon finds herself acting, and thinking differently. Mae even makes sure to work a few hours in customer service because the predictability gives her comfort.

Everyone I know, and probably the vast majority of people I don’t know, will agree that the monster the Circle becomes is not out of the range of possibilities. The genius of the narrative, I felt, was how he made the argument for transparency so palatable to both the readers, as well as the characters in the book.

Mae Holland just got her dream job, working at the Circle, the world’s leading internet company. Even though Mae starts in customer service, her best friend, Annie, is a top-level executive and mentor. Soon the company takes over Mae’s life. She almost never leaves the campus, put her parents on her healthcare plan, and becomes a worldwide sensation.

The Circle’s plan is to make each and every person a member, track their movements, film them, and shine a light on government, as well as private citizens. However, there’s one person in the company unwilling to let it grow beyond control, and he’s asking Mae for help.

Buy The Circle from Amazon.com*
More books by Dave Eggers*

The Circle by Dave Eggers