About:
Steven Spielberg: A Life in Films (Jewish Lives) by Molly Haskell is a biography of the prolific director. Ms. Haskell is a film critic and author. 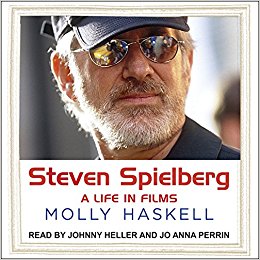 Thoughts:
I admired Steven Spielberg since he burst on to the big screen when I was a child. I remember eagerly anticipating the next Spielberg flick and reading every word I can in such magazines as Starlog (when it was a great film magazine) about his projects and special effects breakthroughs.

So you can understand my delight in getting Steven Spielberg: A Life in Films (Jewish Lives) by Molly Haskell. I can say that I’ve watched almost every Spielberg film out there, many with the enthusiasm of a teenager, so the book spoke to me.

Recently I re-watched the Indiana Jones movies with my kids. I was not looking forward to it because I wanted to remember those great movies as the groundbreaking extravaganzas I remember them (I ran to the theater after school on the opening day of Indiana Jones and the Temple of Doom). To my great delight the Indiana Jones movies are just as good today as I remembered them. The kids loved them (my son dressed up as Dr. Jones for Halloween), and I dare say that even if they were released today, as they were released originally, they’d pass muster with the fans and delight audiences.

Ms. Haskell wrote an interesting, witty book telling stories which I thought I knew but never connected the dots. While I don’t agree with every evaluation the author makes, I appreciate the honesty and thought that went into the narrative.

Mr. Spielberg’s Jewish story is very insightful and the author is obviously very interested in his journey as a proud Jew and a genius film maker. The author connects the director’s life experiences relative to the movies he was making at the time.

This is a great film book about one of our generation’s most notable and prolific directors. The book is insightful, well written, and frankly – just a lot of fun. I listened to the audio CD, narrated by Johnny Heller and Jo Anna Perrin who did a great job and kept my interest throughout.

Steven Spielberg: A Life in Films by Molly Haskell