My Monticello by Jocelyn Nicole Johnson is a collection of stories, one in particular follows a young woman, descendant of Thomas Jefferson, driven from her Virginia neighborhood by a white militia. Ms. Johnson is a short story writer; this is her first novel. 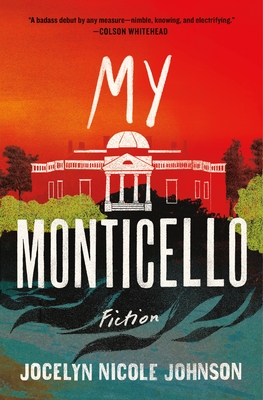 One thing is clear after reading My Monticello by Jocelyn Nicole Johnson – the author is certainly a very competent story teller. The book is basically composed of several short stories, with similar themes of a world fallen apart.

Monticello is, unquestionably, one of our family’s favorite places to visit. We live too far away to go often, but when we’re in the area we surely manage to stop by. In addition, Charlottesville is a wonderful city to visit. The last time we’ve been there was three weeks before the embarrassing American Nazi march. We were obviously saddened to watch as to what that beautiful city became.

I don’t know if the author had that embarrassing moment in American history in mind when she wrote that book. For me, however, is what I immediately thought of, a world going up in flames.

Not the whole world mind you, but what does it matter when it’s your world that’s burning?

I enjoyed the symbolism of the titled story. What Monticello, and Thomas Jefferson by extension, represented then, and now. Much like Jefferson himself, the hypocrisy of life in Virginia for Da’Naisha, the story’s protagonist, is shocking. The beautiful house on a hill, was Jefferson’s legacy and his undoing. For the refugees it’s a shelter from a white mob. For the white mob it’s a symbol which they can’ t let the refugees own.

On the surface, the book is a little thin. However, it is thought provoking especially if one pays attention to what’s going on in the world. Every country is moving to the right, some to pre-World War II levels. The rhetoric is even similar, and we don’t even realize it.

A descendant of Sally Hemmings and Thomas Jefferson has been drive away from her neighborhood in Charlottesville, VA by a white militia. The young lady, along with others, find shelter in Monticello, Thomas Jefferson’s home.

Zohar – Man of La Book
Dis­claimer: I got this book for free
*Ama­zon links point to an affil­i­ate account

My Monticello by Jocelyn Nicole Johnson