About:
Munich: The Man Who Said No! by David Laws is a historical fiction story which tells two connected stories, that of a man in Europe during World War II, and that of his granddaughter, a historian in 2015. Mr. Laws is a national newspaper journalist, this is his first novel. 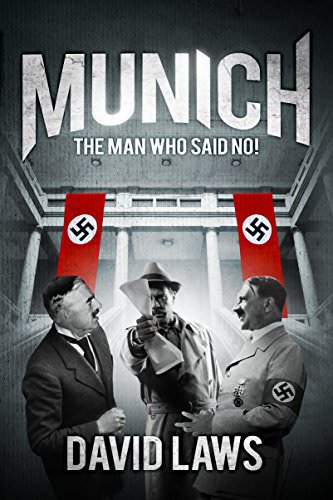 Thoughts:
Munich: The Man Who Said No! by David Laws is a fascinating journey, very creative and fast paced. The book manages to weave just the right amount of history to make the fictional story seem believable and have the reader care about the characters.

I enjoyed how the author jumps from one time era to the other, giving our historian a clue, just enough to pick our curiosity, and then continues to elaborate in the form of a journal from the past. This was very well done and kept me reading.

When I started reading the book, about a quarter way in, I thought the author might have taken on too much. There are many characters to keep track of, at least two timelines, and several sub-plots. Somehow though they all managed to work together without interfering with one another.

I thought it was great that the academic conference in the book has just as much drama, dirty tricks, and backstabbing as any other subplot mentioned.

The two main characters are great, Emma is a modern bad-girl, a no nonsense academic who is not afraid to get her hand dirty. Emma’s “protector”, is a man of many “ex’s” (ex-cop, ex-con, etc.) who is also her mother’s boyfriend. The relationship starts out on the wrong foot, of course, just as any relationship with two hard-headed personalities is. During the book the two learn to rely on each other’s strengths and complement the weaknesses – in short: work as a team.

I enjoyed this book very much, it is smart, fast, and entertaining.

Synopsis:
Bradley C Wilkes, a radio correspondent covering the appeasement signing accords between Prime Minister Neville Chamberlain, Daladier, Mussolini and Hitler decides he needs to warn Chamberlain of his mistake before the accords become official. Bursting into the office, his partner pulls a gun and Mr. Wilkes is never heard from again.

Emma Drake, a historian and researcher, wants to find out what happened to her grandfather. Emma is leading a conference about the appeasement agreement in Munich, but is rebuffed by powerful people and arms dealers using her conference as a cover-up.

Buy Munich: The Man Who Said No! from Amazon.com*
More Books by David Laws