Mr. Jefferson’s Hammer: William Henry Harrison and the Origins of American Indian Policy by Robert M. Owens is a biography of the 9th President of the United States. Not many have heard of Mr. Harrison, he was the first President to die in office, and only served 31 days. 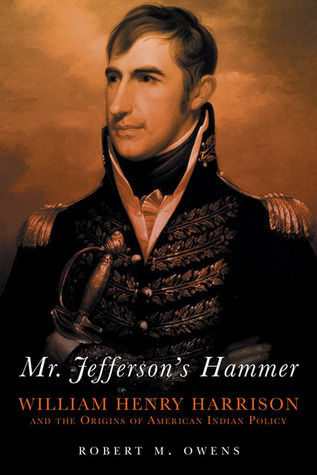 This is not a presidential biography per se, as Mr. Harrison is the shortest-serving President. The author mostly focuses on the time Mr. Harrison spent in Indiana and the issues faced by frontier society.

As a Virginia aristocrat, Mr. Harrison was usually in debt, as were many others, in sharp contrast to his Presidential campaign painting him as a man of the people. He joined the military where he cut his chops negotiating, and fighting, with Native Americans. Later President Thomas Jefferson appointed William Henry Harrison as governor of the Indiana Territory, and this is the part where the book finds its strengths.

Relying on documents relating to Harrison’s activity in Indiana from the Indiana Historical Society, the author provides an insightful window into frontier challenges. Mr. Jefferson’s Hammer by Robert Owens doesn’t shy away from issues that were controversial at the time, as well as today, namely the policy towards Native Americans and slavery.

On this front, the book succeeds immensely. However, it skips the 20-plus years Mr. Harrison served in the military, his childhood, or the three decades (almost) after he resigned as commander of the Army of the Northwest. Only the last few pages mention his service in Congress or his appointment as Minister to Columbia.

The parts that the author intends to cover, and frankly tells us so at the beginning of the book, are covered extremely well. They are well written, well documented, as well as clear, and concise, yet somehow still analytical. The Battle of Tippecanoe, which I heard about but didn’t know much was a fascinating section – frontier propaganda which the author dismantled with ease.

Mr. Owens’ has the fantastic ability to connect his subject’s actions to the difficult life and challenges that society at large experienced.  While incomplete as far as presidential biographies go, this was an excellent book about what makes a President and American frontier society.