About:
Miraflores: Memories of a Young Spy by Keith Yocum is a historical fiction book following a young man’s first CIA assignment in Panama. Mr. Yocum is a seasoned writer and journalist. 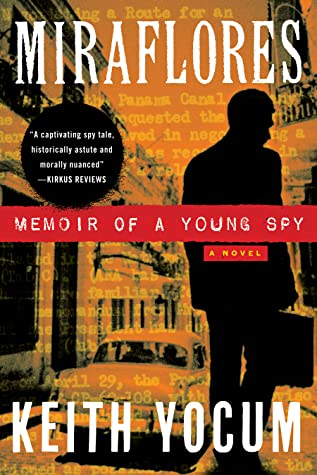 My rat­ing for Miraflores— 5
Buy Miraflores from Amazon.com*
More Books by Keith Yocum*

Thoughts:
One of the enigmatic pulls of spy novels is the moral ambiguity that comes with job. This is mostly true in books, as it is difficult, almost impossible actually, to capture the inner struggle in movies. The difference in the literary James Bond or Jason Bourne vs. their cinematic counterparts are striking when it comes to their inner struggles.

In Miraflores: Memories of a Young Spy by Keith Yocum the author captured the protagonist’s inner struggle in a complex and effective way. Young Nick Halliday joins the CIA part out of patriotism, and part out of a juvenile need to get back at his father, a high level official in the State Department.

The author throws many challenges at his young protagonist, including being assigned an important mission right off the bat, as well as young man’s hormones which cannot be underestimated. The moral ambiguity of the ownership of the Panama Canal, nor does the unethical act of dating one of his students never really bothers the young man as much as his loneliness on assignment.

One of the major plot points in this book is Nick’s relationship with his father. I don’t know if it was on purpose or not, but it’s quite clear that Nick is being the jerk while his father is doing his best to keep an ongoing relationship. I thought this point, as well as the whole book actually, was done very well in an engaging manner.

This is an easy to read, gripping book with lots of good history weaved into the narrative. I found the story to be even handed, presenting the case for the Americans investing, and controlling the Panama Canal, as well as the gripes the Panamanian people had with the project.

Synopsis:
Nick Halliday, a young college graduate, joins the newly established Central Intelligence Agency to fight against communism, as well as getting away from his troubled relationship with his father.  Nick finds himself in the right place, in the right time and has been rushed to an important undercover assignment in Panama.

Pretending to be an English professor at the University of Panama, Nick is trying to infiltrate student groups who are determined to regain ownership of the Panama Canal. Nick, however, is still a young man (23) and falls in love with one of his students, which plays with his heart, mind, and ideologies – something a spy cannot afford.