Article first published as Book Review: It Doesn’t Take a Hero: The Autobiography of General H. Norman Schwarzkopf on Blogcritics

About:
It Doesn’t Take a Hero : The Autobiography of General H. Norman Schwarzkopf is a gripping book, originally published in 1993. Recently we have lost this great man and I decided to revisit the book which I enjoyed tremendously when it was first published. 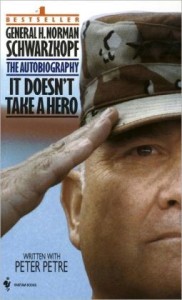 Thoughts:
It Doesn’t Take a Hero by  H. Norman Schwarzkopf is, at its heart, an autobiography of a great executive, soldier and gentleman. While I’m usually partial to autobiographies, I truly enjoyed this one which seemed honest and less self serving than many others. General Schwarzkopf admits mistakes, and positions he has taken for political reasons. Those inner reflections make a very interesting read about decision making in the higher ranks of the military.

General Schwarzkopf covers his early childhood in New Jersey as well as, believe it or not, his Swiss boarding-school experience. An interesting segment in young Schwarzkopf’s childhood takes place in Iran, where his father worked. The General’s time in West Point closes out the formal education before he is sent off to serve in Vietnam.

I have always had a keen interest in how decisions are made in the upper echelon of government.
What is the thinking behind those decisions?
What variables are being considered and why?
What is the process?
Etc.

The book does not disappoint on this level as well, as the coalition, led by the United States, starts to build up with massive deployments in the sea, land and air the reader gets a look behind the scenes at the political arm twisting and maneuvering. The General’s day to day life dealing with Saudi Kings and princes, the Joint Chiefs and politicians are an amazing testament to the legacy he has left behind.

General Schwarzkopf is an intelligent man and it shows, his large personality shines throughout the book and he doesn’t let his ego get in the way. The General’s sense of duty comes across in a heartwarming way, however his insights and self-examination are what makes this book worth reading.