About:
Into Thin Air: A Personal Account of the Mt. Everest Disaster by Jon Krakauer is a non-fiction book telling of the author’s ascent to Mt. Everest. The author participated in an expedition which lost several members during the ascent. 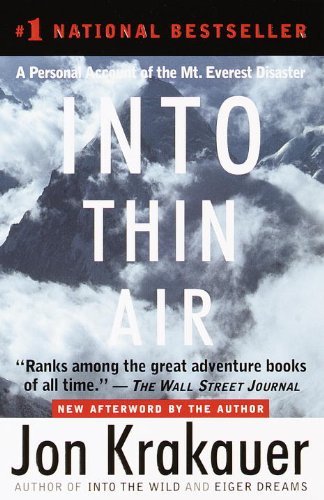 My rating for Into Thin Air – 4

Thoughts:
I’ve heard much about Into Thin Air: A Personal Account of the Mt. Everest Disaster by Jon Krakauer and when I saw it at a library book sale, I immediately picked it up. However, it took me a few months before I got to it (my blessing and my curse).

I’ve also had a fascination with mountaineering since my trip n South America where I went up and down on a few “low” mountains and was for several months staring at the majesty of the Andes.  The beauty and majesty of tall mountains simply take my breath away.

Mr. Krakauer does not shy from telling the reader what an achievement, both physical and psychological, it is to climb the world’s tallest mountain. Even though Everest has received “bad press”, saying it is not a difficult climb, it is still a very challenging and difficult even which takes months and dependent on the elements for success.

The author does not shy away from describing the physical ailments which attack the human body at such high altitude and the dangers they cause. Combining those ailments with physical exhaustion and the effects on the brain creates a most hazardous situation.

The strength of the book is in the way Mr. Krakauer tells the story, combining an adventure with social commentary without resorting to dry timeline lists. Some environmental issues, government bureaucracy (mostly Nepalese) and significant historical accounts are also weaved into the book, however they do not take away from the main storyline, but only add context.

The book moves at a good pace, until the Everest disaster happens, and then it switches gears to lightning speed. From the beginning the reader knows what he/she are getting themselves into and know who will make it to the end and who will succumb to the mountain. Nevertheless, this is still an engrossing and gripping read.

Since most of the story takes place in high altitudes, there are several versions of what exactly happens. The author uses interviews, timelines, common sense and logic to put events in their place as accurate as he can. If you’ve seen the IMAX movie “Everest”, the producers play a role in the rescue as well since they were shooting the movie at the time.

In the edition I bought, the author uses postscripts to correct previous editions and answer critics (mainly Anatoli Boukreev, a guide on the Everest) to his previous position. If you are interested in mountain climbing this is certainly a work worth reading,