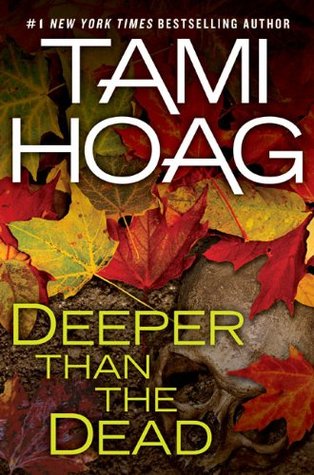 My rating for Deeper Than the Dead – 4
Buy Deeper than the Dead from Amazon.com*
More books by Tami Hoag*

About:
“Deeper than the Dead” by Tami Hoag (website | Twitter)  is a fictional thriller set in 1985, before computers, forensics and a cell phone was as big as a brick (and weighed just as much).  The book follows an FBI agent who is following a killer in a small town in California.

Thoughts:
“Deeper than the Dead” by Tami Hoag is a  compelling, well written, fast paced thriller. If you are a child of the 80’s (as I am) you’ll get a kick out of all the “Miami Vice” and other pop culture references.

The book’s investigative team uses old fashion technology and hard work to attempt and solve a crime.  That approach might seem strange and antiquarian but I still remember those days where a computer in your house was a luxury…and that was a Commodore 64.  There are no DNA tests, computer records, fingerprint matches are still done manually and the science of profiling is just starting to catch on as legitimate.

The book is deliciously suspenseful, surprising and the unexpected twists and turns are a delight which will held my attention throughout.  There are several grim situations in the book, from descriptions of dysfunctional families to scenes of torture which are eluded to but never described.

The characters in the book are strong, believable and Ms. Hoag created interlocking plotlines which work very well together.  Surprisingly enough, the least interesting character in the book is the villain.  The ending also lacked a punch, the story wrapped up quickly almost as an afterthought, there were many questions left unanswered and not everything was tied up in a neat package, which left the reader to wandering about the villain’s accomplices, if there were any.

There is some romantic interludes which add some complexity to the story but do not overshadow the thriller, but simply add to the characters strong relationship.  “Deeper than the Dead” is a very good book and a page turner almost to the very end.

Synopsis:
Oak Knoll, a sleepy California college, town three children literally stumble upon a corpse in the ground. The victim is a young woman who has been jailed in her own body before she was killed – her moth and eyes are glued shut (with Superglue) and her eardrums are pierced.  The killer becomes known ash the “See-No-Evil” murderer.

Anne Navarre, the kids’ teacher steps in to comfort them and help the police question the children in a manner which is appropriate and doesn’t add to the trauma. FBI agent Vince Leone is a profiler, a science which is still new and untested – he is sent to Oak Knoll from the FBI’s basement (hence the book’s name) to try to catch a killer which leaves no evidence behind.

Buy Deeper than the Dead from Amazon.com*
More books by Tami Hoag*

Brought to you by I’ll Never Forget The Day I Read A Book!