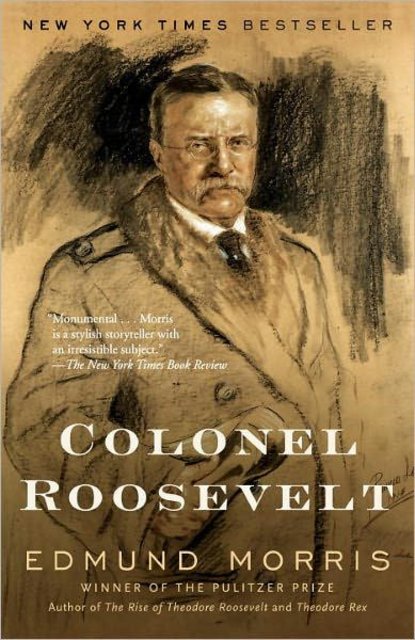 This book is a wonderful conclusion to The Rise of Theodore Roosevelt and Theodore Rex. The biography starts after Roosevelt has left the White House, and follows him until his death.

The book opens with an exciting description of Roosevelt’s African safari, one would think he’d take a bit of time off after his administration, but maybe going on such a trip is his R&R.  Still a popular persona, Roosevelt returns to the United States but cannot stay out of politics. His good friend, and now President, William Howard Taft is not governing to his liking, and, once again, he feels as if he has to throw his hat in the political ring.

This stunt costs the Republican party the victory, a vote split between Roosevelt and Taft gave Woodrow Wilson the victory. This time Roosevelt goes back to the Southwest, and a rough trip to the Amazonian jungle in Brazil.

Like the previous books, Colonel Roosevelt by Edmund Morris is well researched and well-written. It is noticeable how Mr. Morris’ writing got better with each volume. The first volume was written with an eye on an aristocratic, yet energetic youth, the second is a restrained tale of a mature diplomat, this one, with builds up to its known, yet still tragic, end.

Like many others before him, and many after, this great man’s paramount enemies were time and himself, and I wish more was devoted to this subject. Admittingly, after being immersed in the books, I found it almost painful reading about Roosevelt’s fall from heights so painfully achieved.

One of my biggest issues with Theodore Rex was that there was very little of Roosevelt’s personality in the book. The saving grace of the third installment is the Roosevelt family who get much more attention, and helped me understand, and I’d like to think know, the former President.

The last part of the book magnificently summarizes Teddy Roosevelt’s legacy, other biographies, as well as devoting a section to his family. I found the post-presidency conclusion of the trilogy to be on point, an adequate end to a worthy series.