About:
An American Spy by Olen Steinhauer is the third installment featuring ex-CIA agent / assassin Milo Weaver and his quest to live his life in peace and quiet. Mr. Steinhauer  is a writer, TV show creator who has been nominated for several awards. 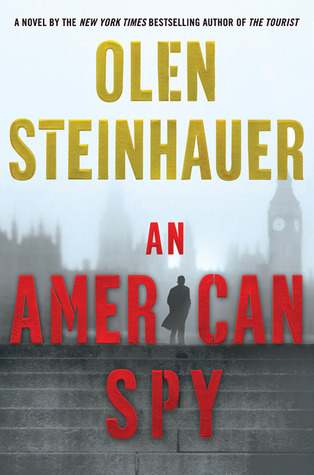 Thoughts:
I enjoyed the two previous Milo Weaver books The Tourist and The Nearest Exit, very much, and was looking forward to read An American Spy by Olen Steinhauer. What I got, however, was a tale which was an effort to read and understand, convoluted, and while interesting, not nearly as riveting as the first two books. I do applaud the author for trying something different, it takes guts and considerable talent to pull something like this off.

There are a lot of moving parts in the book, from previous characters who played minor roles, to minor characters who played major roles previously, to new characters who took over the story. The tale goes round and round but does not move forward as quickly and effortlessly as expected. Mr. Steinhauer refuses to make this novel easy for his readers, but the relish in which he writes, creating a world full of paranoia is worth the effort.

Usually there is a murder, many chapters later the same murder is replayed, this time though through the eyes of another which gives the reader more insight of what happened, why, and by who. This technique worked well, but is overdone to the point of confusion.

One of the major selling points of the series, is that gloomy Milo Weaver questions his line of work, the ethics of it, his boss, and the world he knows. This novel has no such qualms, which I felt gave the series some gravitas, and made it more human.

Milo could have sat this novel out, there is very little of him in it. He is still recovering from a gunshot wound, watches what he eats and what he does.

The plotting is very intricate, but the character development which was the star in the Mr. Steinhauer’s books is not here. I’m looking forward to see where the author will take the series from here as he is, in my opinion, one of the best espionage authors currently writing.

Milo Weaver is back home after linking the Chinese government to the destruction of CIA’s Tourism Department. Milo would like to spend the rest of his life with his family, raise their daughter and disappear off the radar of the intelligence agencies.

Milo’s former boss, Alan Drummond, can’t let the fact that 33 Tourists died under his watch and uses one of Milo’s compromised aliases to go to London, and disappear.

An American Spy by Olen Steinhauer