About:
A Shot in the Moonlight: How a Freed Slave and a Confederate Soldier Fought for Justice in the Jim Crow South by Ben Montgomery tells the true story of George Dinning, a freed slave in the American South and the way he made history. Mr. Montgomery is an award winning reporter and Pulitzer Prize finalist. 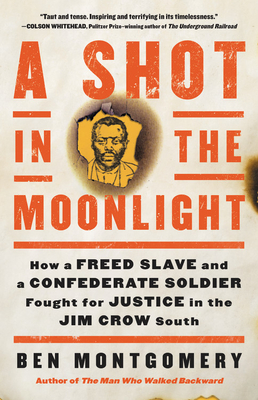 Thoughts:
This was one of these books that you find once in a while which you simply cannot put down. Mr. Montgomery knows how to tell a story, building a narrative, and tension while keeping the narrative flowing.

A Shot in the Moonlight: How a Freed Slave and a Confederate Soldier Fought for Justice in the Jim Crow South by Ben Montgomery follows a freed slave, George Dinning, an honest, hardworking family man by all accounts. Mr. Dinning lives in Kentucky, the Jim Crow South, and prospering via his work ethic, brains, and good nature. One evening a mob comes to his farm demanding he’d leave town or be lynched. Mr. Dinning was accused of stealing meat and burning a smokehouse – with absolutely no evidence and no history of doing anything even remotely close. The mob shot at the house, Mr. Dinning returned fire and killed one of them, a prosperous white man.

Mr. Dinning, not a stupid man by any means, rode miles away and handed himself into a sheriff he knew would try to protect him. This was dangerous as law men were intimidated by mobs and often gave into lynching to save their own skins. His case would have to be tried in federal court though, since he didn’t have any rights in Kentucky to sue white people. Mr. Dinning made history by being the first freed slave to successfully fight his would be white killers.

The research Mr. Montgomery has put into this book is impressive, the writing even more so. As a true reporter, the author relies on first-hand accounts, while describing the far reaching implications for Kentucky, African-Americans, and the nation as a while.

This book has many fascinating characters, George Dinning of course, but also his lawyer Bennett H. Young. Mr. Young was a man of contradictions. A Confederated soldier, who simultaneously fought for the erection of Confederate monuments, while at the same time operating charities to help the African-American community as well as working pro-bono in the courts, being viewed as a friend for the community.

A fantastic book, telling an amazing story of an important chapter in American history. An important book to read, especially at these trying times.