A Jew Who Defeated Nazism: Herbert Sulzbach’s Peace, Reconciliation and a New Germany by Ainslie Hepburn tells of Mr. Sulzbach’s role in resurrecting the British-German relationship after World War II. Ms. Hepburn is a writer, tutor, and social historian from England. 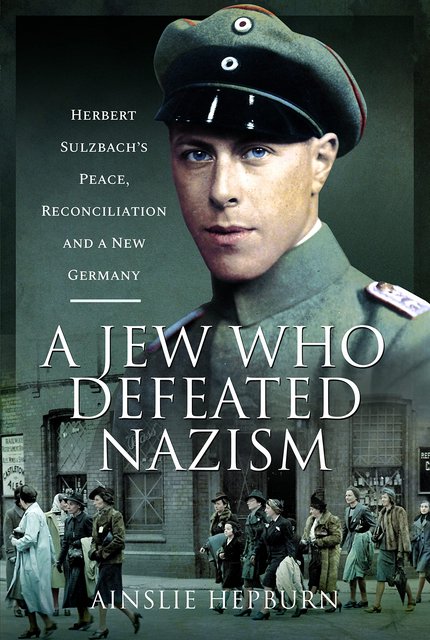 A true humanitarian who practices what he preaches, is certainly difficult to find. Mr. Sulzbach, however, is one of those rare gems. Working as a liaison in a POW camp, he used his knowledge, wits, and personality to de-Nazify soldiers and officers. In fact, he was so successful that soon his program became famous.

A Jew Who Defeated Nazism: Herbert Sulzbach’s Peace, Reconciliation and a New Germany by Ainslie Hepburn tells of the lifelong journey of Mr. Sulzbach, cementing his place in history. Mr. Sulzbach worked with many low-lever POWs, but spent much time with high-ranking SS officers as well. In Featherstone Park in Northumbria, Mr. Sulzbach made sure each of them returned home with the understanding of how democracy works.

Amazingly, his methods were to impose no censorship, and getting the prisoners to debate, ask questions and answer them themselves. I have read many books about disinformation lately, and as many of us know from debating online “experts”, one cannot change minds if the opposite party is dug in.

Mr. Sulzbach believed, rightfully as it turned out, that one cannot simply kill the tens of millions of Nazis. Furthermore, the POWs returning home were the best hope for future peace. Even those who were born, and undeniably mind washed, under the Nazi regime.

In this time of great disinformation campaigns, I would have liked the book to spend more time on his methods. It’s a short book, even so, it took too long to get to the point. There was no need to go through Mr. Sulzbach’s pre-WWI, or even between the two wars, so closely. I would have much rather read more about his methods. The ending seemed hurried, the author tells us about his death and funeral, but then continues to his other achievements while still alive.

Nevertheless, this is an amazing book about an amazing man. I embarrassed to say I never heard of Herbert Sulzbach, but I know that now I will certainly never forget.

Buy A Jew Who Defeated Nazism from Amazon.com*
More Books by Ainslie Hepburn*

A Jew Who Defeated Nazism: Herbert Sulzbach's Peace, Reconciliation and a New Germany by Ainslie Hepburn