Robert J. Lloyd discovered Robert Hooke’s Diary while working on his MA in the History of Ideas. Based on his research, he wrote The Bloodless Boy, a murder mystery involving historical characters, and the scientific experiments they were working on. The novel is a very interesting, and well written to boot.  I’m fortunate that Mr. Lloyd took the time to answer some of the questions I had with style, grace, and sense of humor. 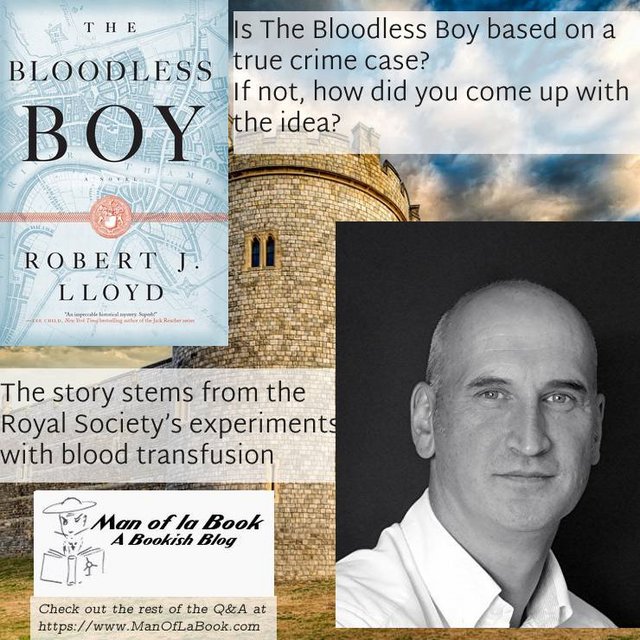 Q. Why did you decided to make Harry Hunt, Robert Hooke’s assistant, as the main investigator instead of Hooke – a notable scientist?
A. Originally, Hooke was the main investigator, with Harry as his assistant doing his bidding. This made Harry far too passive, going off to perform some task or find something out, with Hooke doing the thinking for them. Things became far more interesting when I had Harry think for himself, and disobey Hooke. This created secrets and tension between them, and made Harry a far more interesting character. Now, he wished to come out from Hooke’s shadow, and prove himself as ‘his own man’. Also, at this time, Hooke suffered from a severely hunched back. It didn’t ring true to have him fighting assailants at the top of the Monument, for example.

Q. The book describes late-17th century society as suspicious of science, disinformation campaigns galore, and different factions fighting with no middle ground to meet. As a historian, do you see similarities between restoration England and today’s society?
A. Yes!

Q. I love the way the book is written, linguistically authentic to the time period (as far as my non-professional knowledge goes). That being said, even some schmo like me, that American English is his second language, could understand it. How did you manage to pull off that off?
A. Thank you. That’s kind of you to say. I put a lot of effort into the characters’ dialogue. Hooke’s diary, letters, and his incredible Micrographia, helped me find a voice for my characterisation of him: the rhythms of his writing, the order of his sentences, and phrases he used. Actually, he’s very clear in his writing style. If the spelling is modernised, it would be difficult for most people to identify that he wrote over 300 years ago, I think. I found plays of the time useful, by Etheridge, Dryden, and Behn, and especially Shadwell, whose character his The Virtuoso was based on Hooke. (Hooke was terribly offended when he saw the play.) Although written later than when The Bloodless Boy is set, Daniel Defoe’s novels are full of great vocabulary, and again, show the rhythm of people’s speech, which was important to me to reproduce. I’ve deliberately included contemporary scientific and medical terms, which most people wouldn’t know, to give more 17th century flavour to the tale.

Q. Is The Bloodless Boy based on a true crime case? If not, how did you come up with the idea?
A. I didn’t base the dead boy on any real case, and I’ve not found anything similar while researching or writing the story. The other murder (no spoilers!) is real, although I changed the place of the body’s finding. How did I come up with the idea? The story stems from the Royal Society’s experiments with blood transfusion, and also Hooke designed and built the ‘air-pump’, an instrument able to create a vacuum inside a glass chamber. I put the two things together: the image of a dead boy preserved inside the glass was there at a very early stage of writing.

Q. Have you found any challenges in promoting the book on social media? Any positive or negative experiences online vs. in person? Any advice to other authors, or anything you would do differently for your next book?
A. I’ve been lucky to have a group of enthusiastic ‘book-bloggers’ get behind the story, which created a lot of buzz. I’m amazed at the energy and enthusiasm they put into promoting authors like me, and new books. I’m also lucky—incredibly lucky—that Christopher Fowler (Christopher writes the Bryant & May mysteries) discussed my books on his blog, which brought them to wider attention. Through his blog they came to the notice of Melville House Publishing, based in New York, who felt them of sufficient quality to publish. (The sequel is out in November.) Without Christopher’s intervention, they would still be only available on Amazon in their self-published form.
As far as advice to other authors, I’m a bit dim with twitter, and often flummoxed by it. My ‘best’ tweets can go by without a murmur, and a flippant aside can blow up! My general advice would be to keep plugging away. My story includes a lot of luck, and the generosity of others.

Article Name
Author Q&A with Robert J. Lloyd
Description
Robert J. Lloyd discovered Robert Hooke's Diary while working on his MA in the History of Ideas. Based on his research, he wrote The Bloodless Boy, a murder mystery involving historical characters, and the scientific experiments they were working on. The novel is a very interesting, and well written to boot.  I'm fortunate that Mr. Lloyd took the time to answer some of the questions I had with style, grace, and sense of humor.
Author
Man of la Book
Publisher Name
Man of la Book - A Bookish Blog
Publisher Logo