Author Juhea Kim made a strong debut with her novel Beasts of a Little Land. The book is an epic story of love, friendship, war, and redemption during the early part of the 2oth Century – decades which defined Korea and the world as we know it. Ms. Kim was kind enough to agree to answer a few questions for this little corner of the Internet. 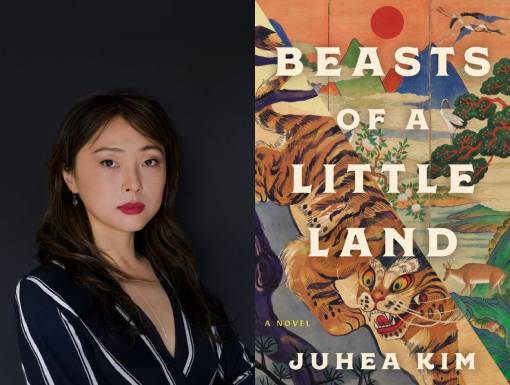 Q:  One of the themes I found in Beasts of a Little Land was the interconnections people make throughout our lives. I think this concept is foreign to a lot of people, especially in the US due to its size and concept of rugged individualism. Is the concept part of Korean culture or identity, or is this something you simply wrote into the book?
A: This concept of interconnectedness, or inyeon, is one of the foundational paradigms in Korean culture. In fact, if you can’t accept this worldview, it would be very difficult to understand a book in which friends, lovers, and enemies impact one another’s fates so thoroughly, both consciously and unconsciously—yet this is exactly what reality feels like to a Korean person. It’s like magical realism or the “marvelous real” in Latin American literature: the fantastical element isn’t just there for whimsy or plot, but directly reflective of that cultural reality. I find it very satisfying that my book not only depicts Korean history with Korean characters, but also does it in a way that reflects Korean thought. Fortunately, many non-Korean readers have also related to this concept as well, and Beasts has been doing really well in foreign rights (publishing in 10 countries and counting!), showing that what is most authentic is indeed the most universal.

Q. I really enjoyed the way you represented different Korean political ideologies in different characters, doing so without prejudice. How did you research the attitudes at the time of different political persuasion during a time of great turmoil not only in Korea, but around the world?
A. Research felt relatively easy for me because I am fluent in Korean and could read first-hand sources from that time period. I read a lot of history books of course, but also Korean novels and short stories from the early 20th century—and even some translated works by Japanese authors.

Q. How were Korean courtesans treated in Korean society? Were they considered to be outsiders, or an important part of the cultural identity of the country?
A. The social attitude to courtesans was so complicated throughout Korean history. Courtesans were the most intellectual, liberated, financially independent, and artistic women in Korea going back centuries. They were absolutely an integral part of the cultural identity, especially because famous courtesans were like celebrities of our day. They posed for paintings, their fashions were copied, and their poetry became a part of canonical literature. They were also a very patriotic group, and became involved in not just the Korean Independence movement of the 20th century, but many other wars since the medieval period. On the other hand, they were legally a part of the lowest class of society, along with tanners and butchers—the “unclean” professions that actually could be quite lucrative. This probably motivated the courtesans to hold themselves to a high standard of courage, patriotism, loyalty, and even faithfulness to certain lovers. Like people in every class in every society, they wanted to prove that they were worthy.

Q. You read in several languages, so do I. Do you find yourself enjoying one language over another? Does reading in different languages influence your writing or writing style?
A. Reading in different languages absolutely impacts me as a writer. This is just my personal view—but I find that world literature (non-American literature) has a lot more urgency and poignancy, whereas contemporary American publishing tends to be more solipsistic and inward-facing. I think this is because, around the world, people lead a lot more difficult and even dangerous lives. They don’t want clever, they want the real; and they need books that can save them. I think that’s the appeal of a book like Beasts in countries as far from Korea as Russia or Saudi Arabia; the theme of fighting oppression will resonate in a unique way in such countries. On a craft level, I think reading in multiple languages helps me create better prose. It feels like shaking my brain loose in the best way.

Q. I noticed that portions of the proceeds from Beasts of a Little will be donated to the Phoenix Fund. Could you tell us about the fund and why it’s important to you?
A. What a great question! I think that this is one of the best parts of Beasts. The Phoenix Fund is a Vladivostok-based conservation NGO dedicated to protecting the critically endangered Siberian tiger and the Amur leopard. They do this in two ways: first, arts education and community outreach teaching children how to love and protect nature. I know that this is effective because I myself became a lifelong nature lover and advocate thanks to reading books about animals as a child. And reaching children actually impacts their parents as well, preventing them from poaching tigers/leopards or their prey animals. The Fund also supports and incentivizes anti-poaching units so that they perform better.

Currently there are only about 500 Siberian tigers and around 100 Amur leopards left in the wild. It’s an especially tragic figure considering that, as you’ve read in Beasts, thousands of these animals used to live in harmony alongside humans for 5,000 years in the Korean peninsula. Decades after their extinction in Korea, the lasting spiritual significance of these animals—especially the tiger—to Korean culture simply can’t be overstated. The good news is that conservation success IS possible with long-term commitment and execution, even for a species with just 100 individuals remaining. I’ve always thought of my art as inseparable from my advocacy, and I’m incredibly proud to donate 5% of my pre-tax earnings from the worldwide sales of Beasts to the Phoenix Fund. You can find out more and donate at the Phoenix Fund website.

Q. Have you found any challenges in promoting the book on social media? Any positive or negative experiences online vs. in person? Any advice to other authors, or anything you would do differently for your next book?
A. Oh my goodness! Real talk! I am probably a bit too eager to respond to comments on social media, because I’m a debut novelist and I’m so excited about every single reader. I actually didn’t anticipate such an overwhelmingly positive response—so many genuine compliments, many people saying this is the best book they’ve read all year (or even in their entire lives!)—but it does take up a lot of time I should be writing. I also read the negative comments and while they are thankfully few, it does feel very personal. All writers are pretty sensitive people—it helps us with writing, but not with publishing! I have to continue to take all comments with a grain of salt and remember that no one book can be everything for everyone, and that’s okay. And there is just one thing I would do differently for my next book: I would love to not publish in December.

A big “thank you” to Ms. Kim for taking the time to answer my questions. I’m positive we’ll hear more about Beasts of a Little Land, as well as future writings from the author.

Article Name
Author Q&A with Juhea Kim
Description
Author Juhea Kim made a strong debut with her novel Beasts of a Little Land. The book is an epic story of love, friendship, war, and redemption during the early part of the 2oth Century - decades which defined Korea and the world as we know it. Ms. Kim was kind enough to agree to answer a few questions for this little corner of the Internet.
Author
Man of la Book
Publisher Name
Man of la Book - A Bookish Blog
Publisher Logo