About:
Walt Disney: The Triumph of the American Imagination by Neal Gabler is a biography of this famous man. This is a long biography, but a must read for any Disney fan. 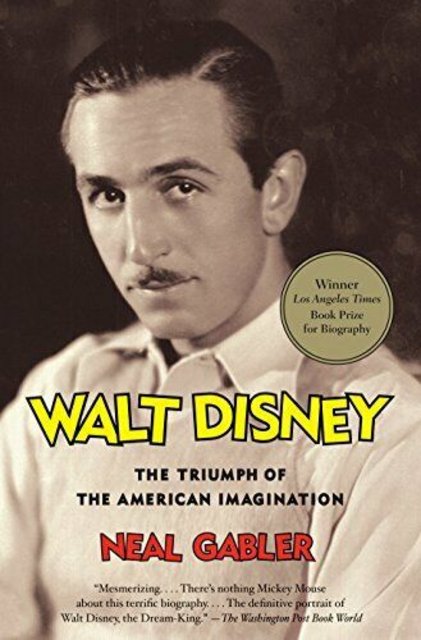 My rat­ing for Walt Disney: The Triumph of the American Imagination — 5
Buy this book in paper or elec­tronic format*
More Books by Neil Gabler*

Walt Disney: The Triumph of the American Imagination by Neal Gabler is a well-researched biography. Mr. Gabler doesn’t put Walt Disney on a pedestal or takes his side on several issues, in fact he constantly calls him naïve, especially in business and politics (for more about the business side see: Disney U: How Disney University Develops the World’s Most Engaged, Loyal, and Customer-Centric Employees by Doug Lipp). It almost seemed as if the author disagreed with some of Disney’s views and, subconsciously or not, wrote to that affect.

I felt that I got a good idea of what Walt Disney was like, a man full of vision, perfectionist and a control freak who can be a grumpy man and difficult to work with. Disney’s politics and his head butting with the unions (sometimes justifiably) also play a big part in the book and helps understand the man. I was surprised to learn that the man responsible for “the happiest place on earth” was not a very happy man himself.

I learned a lot from this book about the man and the company he built. I had no idea that for most of his life Disney was financially strapped and that his movies were box office bombs (for the most part). I was also surprised to learn that during World War II Disney mainly relied on government work to keep the company afloat and as a result, his work lost its edge.

The book will make you look at Disney features in a new light, weather artistically, cinematically or just because you knew the hard work and drama that went behind the scenes. Mr. Gabler does not paint Walt Disney as a saint or a sinner or a tyrant as many say, he tries to separate the man from the legend, good or bad.

Walt Disney: The Triumph of the American Imagination by Neal Gabler