“The Losing Role” by Steve Anderson (Website | Facebook | Twitter)  is a historical fiction book which takes place during World War II. The story follows a failed German actor who is drafted to infiltrate American lines posing as an American officer.

The author has kindly made available three (3) books in SEVERAL FORMATS to be given away – Enter at the end of the post. 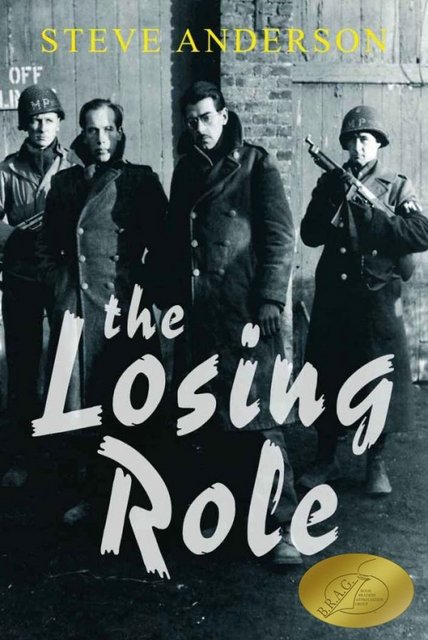 I’m a sucker for espionage thrillers especially if they take place in WWII.

“The Losing Role” is an interesting book with a refreshing twist, it is told from the view point of a German solider – and a likable one at that. Max has been disillusioned by the promises of America, he has been grinded by the rough life of an immigrant and an actor and has decided to go back and protect the Fatherland.

As an immigrant I can certainly understand Max’s disappointment. Many immigrants come to America with a promise of “streets lined with gold” only to realize that the only thing guaranteed is hard work and that there is no such thing as “easy money”.
No matter what everyone else say.

Mr. Anderson made Max an affable character, an actor wearing a uniform due to his naïveté. We meet Max on the brutal Eastern front, fighting the Russians, but learn about his life in America through flashbacks.

This is a well researched and fascinating book. Mr. Anderson’s description of Operation Greif (Germans posing as Americans) comes across very vividly as a part of the last attempt for the Germans to turn over the war, even though it seems that the men in the field realize that it is in vain. However the confusion that Operation Greif caused among the Americans is well documented and Mr. Anderson does a wonderful job bringing that to life.

Some historical characters, such as the colorful German Lt. Colonel Otto Skorzeny, make a cameo which is always a pleasure. Skorzeny was the leader of Operation Greif and lived to see the end of the war (and then some), he was a formidable commando.

Max Kaspar, a.k.a. failed German-American actor Maximilian von Kaspar, is fighting on the Eastern front when he is drafted by the SS for an unknown mission. Soon Max discovers that he has been recruited to impersonate American officers and cause havoc behind enemy lines.

Realizing the absurdity of the plan, Max devises his own plan which ultimately, he hopes, will bring him back to America and to his true love, the theater.

An absurd German plan? – Buy the book to find out*
More Books by Steve Anderson*

The Losing Role by Steve Anderson