Otto Skorzeny: The Devil’s Disciple by Stuart Smith is a biography of “Hitler’s favorite commando”, a man who became a legend in his lifetime, but almost forgotten these days. 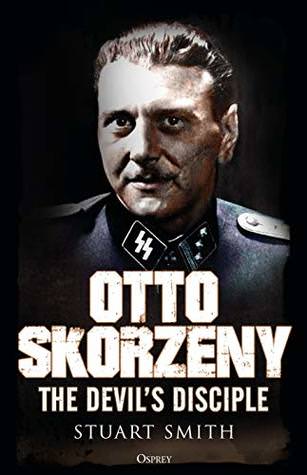 Throughout my reading on World War II I have yet to encounter the name of SS-Obersturmbannführer Otto Skorzeny, either that or he was mentioned in a passing paragraph. When Otto Skorzeny: The Devil’s Disciple by Stuart Smith popped up in front of me it sounded too interesting to pass up.
I was right.

Skorzeny is a character which even the most brilliant minds in Hollywood would have a tough time coming up with. A man who is as good in self-promotion as he is I soldiering, not afraid to steal other men’s credit to enhance his legacy, but can also “walk the walk” when necessary.

It seems that along with guts, Skorzeny was blessed with charm, and not small amounts of chutzpah. As an Austrian, he also managed to get on the right side of Hitler, to the chagrin of other dutiful Nazis. Even though he was trained as a mechanical engineer, Skorzeny was found he had an aptitude for networking, and a strong liking of the limelight.

As a commando, he has managed to be front and center when rescuing Mussolini and discovered that he and the camera had a mutual liking. An impressive, hulking man with sword dueling scars on his cheek, he seemed to embody the myth he was building for himself.

The author doesn’t buy the self-serving stories though. This biography cuts through the aspects of Skorzeny’s life separating fact from fiction, making logical assumptions about events which we have little, or no, documentation of.

The author highlights Skorzeny’s contradictions, a brave and reckless man who knows who to get on his side, but yet a terrible judge of character. He seemed to believe his own stories, and while at it, make other people believe he has much more power and influence than he ever did. A racist Nazi who actually believed the racial superiority nonsense, but when push came to shove worked with the Israeli Mossad.

It’s surprising that I’ve never heard of this man, a legend then, and it appears now as well since much of the Special Forces methodology today is based on his methods. A fascinating biography of a man which has much in common with today’s politicians, self-serving, aggrandizing, and believing their own self-serving stories, regardless of the truth.