The Divider: Trump in the White 2017 – 2021 by Peter Baker and Susan Glasser is a comprehensive overview of President Donald J. Trump’s administration. Mr. Baker and Mrs. Glasser are journalists, and a happily married to each other. 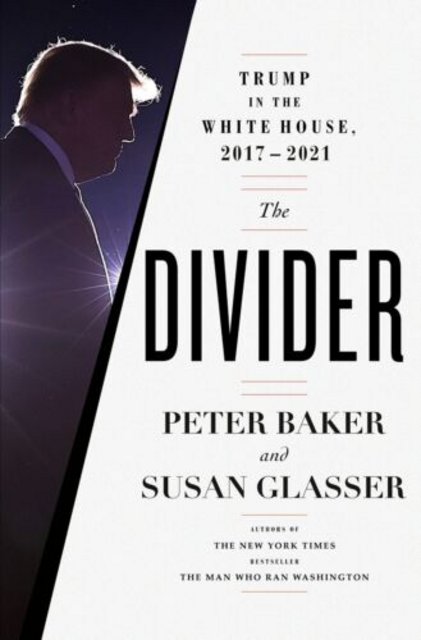 We’ve heard this before: Donald Trump is a unique threat to American democracy. There’s nothing earth-shattering about the book, and I don’t know why some of the stories were included instead of policy discussion. And yet, this is a comprehensive, extremely well-researched, readable, and fascinating book.

The Divider Peter Baker and Susan Glasser does a good job, however, detailing how the GOP became the Party of Trump. Much like in Thank You for Your Servitude, it chronicles how party leaders just sat back and let Trump take it over, ideology be damned as long as there’s a win at the end of the election. The main beneficiary of this was Mitch McConnel’s agenda, but the price was high. A political party with no platform, agenda, or position other than “we stand with Trump”, as the 2020 RNC’s platform blatantly stated.

I do disagree with some of the assessments, for example:

“Trump seemed to believe that he could win again by replicating the polarizing strategy that worked in 2016, however much of a fluke its success has been.”

Was it really a fluke?
Divide and conquer has been a winning strategy for a long time, and has been honed to a fine science by Karl Rove. If anything, winning by inclusivity is a fluke.

The authors point out, over and over again, that Trump’s biggest foe was himself. His need for enemies, real or imagined, as well as pitting advisors and staff against one another, were the biggest obstacles. Jared Kushner, however, comes across as a competent administrator, who learned quickly how to manage his father-in-law (I am looking forward to reading his book at some point).

The most sobering aspect of this book was how many highly educated people in high office were willing to overturn an election, lie, and cheat because their side lost.  As the authors point out, the threat to the United States is not only Trump but those willing to pick up his anti-Democratic mantle.

As the authors point out, a comprehensive, detailed account of the Trump administration has not been published. If history is any indicator, we have about two decades to wait.

If you’re leaning to the left, center, or right you’ll probably like this book. If you’re a MAGA Republican, probably not so much. However, it is packed with first-hand quotes, as well as great information, so I do feel that it has a lot of value.

The book is a compelling narrative of an administration steeped in non-stop scandal, much of it its own doing. Touching almost every headline generated from the oval office, and many generated about it. From the Muslim ban to the border wall, to the election and the attempt to overturn the results.

The book paints Trump as a President who thinks he knows everything. This is not unique to American Presidents. Teddy Roosevelt was known to preach to experts, Nixon of course thought he knew more than anyone, among others. The difference, as many knew at the time, is that President Trump was so convinced he knew everything better than everyone and simply refused to listen to other opinions. I’ve read several articles about why that is, but that is not relevant to this book.