Thank You For Your Servitude: Donald Trump’s Washington and the Price of Submission Mark Leibovich chronicles the campaign and presidency of the 45th President. Mr. Leibovich is an award-winning journalist and political reports. 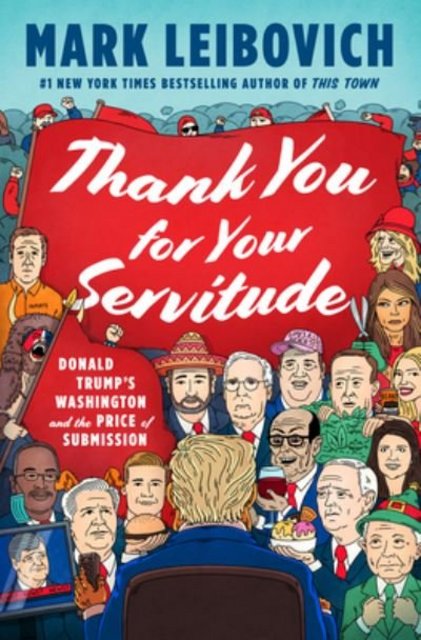 I bought this book when I saw Mr. Leibovich’s appearance on Meet the Press. So yes, it helps to sell books. I enjoyed his commentary and sense of humor as well.
The fact that it was 50% off at my local book store sealed the deal.

The author attempts to analyze the culture of submission around President Trump and within the GOP. He analyzes the personality cult built around him during the campaign, as well as his enablers which fully bought into his version of reality.

The book is not necessarily about President Trump, but more about those enablers around him. Sean Spicer, Mike Pence, Mark Meadows, Kellyanne Conway, Hope Hicks, and others. Special arrows and daggers are kept to the likes of Reince Priebus, and Mitch McConnell, mainly because they should know better, as well as Lindsey Graham who threw his best friend and roommate, John McCain, under the MAGA train.

There’s a section specifically reserved for MAGA converts, who know exactly what nonsense will get them elected. Ron DeSantis, a bright but undistinguished politician, flourished after he adopted the MAGA mindset, just one example.

Much of Thank You For Your Servitude by Mark Leibovich takes place in Washington DC’s Trump International Hotel. While lobbying in hotels has been a tradition since Grant, it is clear that the path for a visit to the oval office goes through that particular lobby, where the powerful gather to make plans and policy.

For us political junkies, there’s not much new in this book. Even if you just paid a bit of attention there might be little insight here as the author simply scratches the surface of noteworthy events with wit and, might I say, snarkiness.

This is a chronological review of the world around Donald Trump since 2015. I did not think this was a “hit piece”, unless you’re Lindsey Graham. The book itself is a bit schizophrenic in that it wants to get into the mindset of the enablers, as well as chronicle events from a left-of-center perspective.
But it really adds nothing new to the national conversation.

Buy Thank You For Your Servitude from Amazon.com*
More Books by Mark Leibovich*

Thank You For Your Servitude: Donald Trump's Washington and the Price of Submission Mark Leibovich