About:
Gods and Generals: A Novel of the Civil War by Jeff Shaara is the first novel in an American Civil War trilogy, written from several viewpoints of Civil War characters. This is a prequel for the Pulitzer Prize winning book The Killer Angels by Michael Shaara, the author’s father. 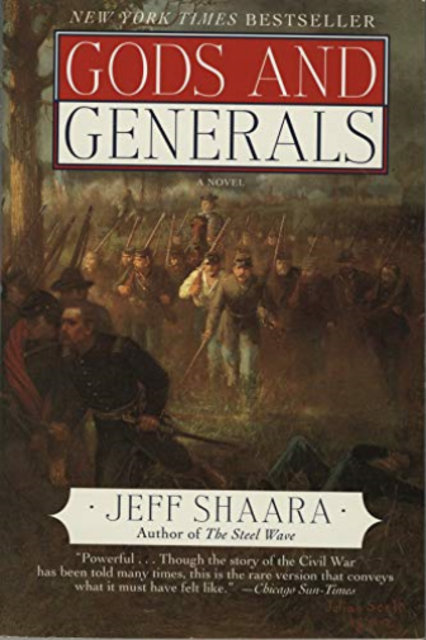 Thoughts:
The first thing which I liked about Gods and Generals: A Novel of the Civil War by Jeff Shaara is the author’s note which assured the reader that he is trying to carefully follow recorded history. The paced is fast, but not lightning fast, and “man on the ground” type of feel really makes the book shine. Mr. Shaara writes well about battles and the history – in an overview sense – is mostly accurate mainly concentrating on Manassas, Fredericksburg and Chancellorsville.

Mr. Shaara chronicles the early successes of the Southern army, experiencing victories which dominated the landscape and headlines. These victories led the Southern generals to falsely believe their army is unstoppable. On the other side General Hancock sees, in frustration, the Union’s reluctance to completely and utterly destroy the weak Southern armies led by Lee due to politics are due to unbelievable incompetence.

Mr. Shaara goes into strategies and high level decision making, aspects which I always find very interesting, and appreciate authors which tackle such difficult ideas. Many of the changes are done on the Union side, where political appointees make way in favor of competent leaders.

As in most of Mr. Shaara’s books this one is also “historical fiction”, an oxymoron if you ever head one, and is a very interesting character study of the major players. I especially enjoyed the characters of Jackson, Chamberlain, and James Longstreet and give thanks to this book for sparking my interest in those two fascinating figures which prompted me to read more about them.

Gods and Generals: A Novel of the Civil War by Jeff Shaara