Wolf by Herbert J. Stern and Alan A. Winter is a historical fiction book about a fictional man who, during World War 1 befriended Adolf Hitler and ties his fortunes with him. Mr. Stern is a former US attorney for the District of New Jersey and a published author. Mr. Winter has written four novels, and is an associate professor at Rutgers University. 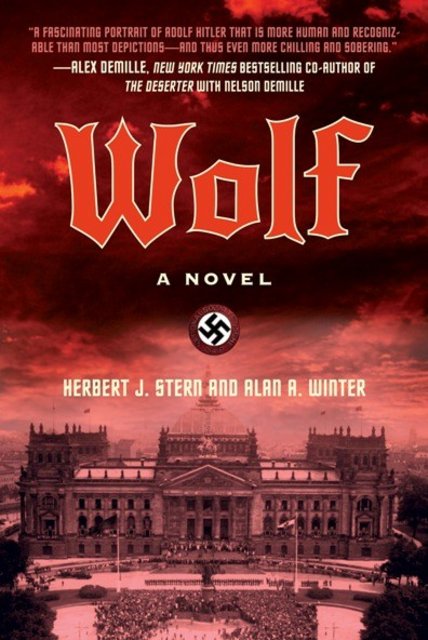 I enjoyed reading this book very much, it was an interesting take on events which I’m already familiar with. I have always been interested in the banality of evil, how easily one can manipulate good people, en masse, to do or agree to evil things (The Perfect Nazi: Uncovering My Grandfather’s Secret Past by Martin Davidson is a fascinating read about the subject).

Wolf by Herbert J. Stern and Alan A. Winter tries to answer a part of that question by showing the magnetism which Hitler possessed. His ability to induce the masses to his nationalistic platform, change their view points, convince them of non-existent facts.

The part, making Hitler a somewhat likeable guy, is an interesting twist. Most of us grew up realizing what a monster him and his upper echelon minions were, as well as many on the bottom rungs who executed their directives. The author uses Friedrich Richard, a fictional friend, to be the eyes and ears of the reader, going into secret meetings and being with the tyrant from the start.

Through Friedrich we are witnessing one of the ugliest events of the 20th century, from the front seat. Friedrich is privy to many meetings and has a personal insight into Hitler’s taking over Germany. Even though he does not agree with everything he says, he does support him due to his strong notion of building up Germany and the need to get out from under the restrictive and punishing terms of the Treaty of Versaille.

This book is very well written, the authors did not take much, if any, historical liberties. The novel is filled with German class warfare in the political arena, as well as makes an effort to explain the German people’s economic struggle. While the main character is fictional, many of the historic persons are just as interesting and engaging. Some of the time the authors fill us in on events which the protagonist was not witness to, but I felt his search for identity was one of the highlights of this fascinating book.

A wounded soldier who has lost his memory receives a new roommate at the hospital, this army corporal has been temporarily blinded by a gas attack and introduces himself as Wolf. The solider gets the name of Friedrich Richard, temporarily so he’ll at least have an identity, as he and Wolf form a lifelong bond.

Wolf, an engaging and charismatic man, introduces himself as Adolf Hitler. Through Friedrich’s eyes the reader gets an insight into the rise of this evil dictator.

Wolf by Herbert J. Stern and Alan A. Winter