I got this eBook for free.
Article first published as Book Review: We, The Drowned by Carsten Jensen on Blogcritics. 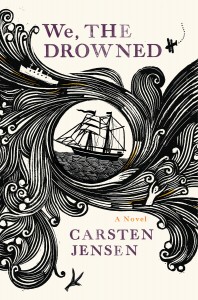 About:
“We, The Drowned” (Website) by Carsten Jensen is a spellbinding, award winning (Danske Banks Litteraturpris) fictional book which spans 100 years in the lives of the inhabitants of the small Danish coastal town Marstal. Jensen’s debut novel is already hailed as an instant classic and rightfully so.

Thoughts:
Did you ever open a book, read the first paragraph and simply knew that you are in for a treat?
This was how I felt about Carsten Jensen’s “We, the Drowned”.

The “we” in the title is present throughout the novel as the narrator spins his tale. It is obvious that the narrator is from the Danish port town Marstal, part of the community who bears witness for a Century. We never know who the anonymous narrator is and that is part of the brilliance of this epic novel.

The characters in the book come right off the page. The whole town comes alive and the reader gets to know the main characters as well as the supporting cast. The women who go on living with their fathers, husbands, brothers and sons off for years on a voyage who they might, and often not, come back. We get to feel the anxieties and aspirations of the sailors, the plight of the women as well as the town’s children.

The subject matter of this book is not pretty and often brutal. Marstal is a town of sailors with a famous nautical college – any citizen who is not at sea can easily feel bitter. Such is school master Isager, a sadistic sad man who after a day of physically and mentally punishing the kids has to go home so his “fat and psychopathic [wife] would thrash [him]”. (Forgive me Roger Waters).

“We, The Drowned” makes a vivid and lucid point how a commercially successful society (the town of Marstal) can live in peaceful avoidance of the fact that their prosperity comes at the expanse and misery of hundreds of thousands, if not millions, of people.

The political & social commentary along with an ambitious story and vivid characters is a winning combination. The character of Albert Madsen, who returns from a voyage to find his missing father serves as the book’s, and the town’s, moral center. Albert mentors the young Knud Erik, the hero of the second half of the book.

Much like life this is not a tidy book, the colorful stories which the author claims have a grain of truth in many of them, turn from tidy to wild with an uplifting and sobering message at the end.  Much of the book explores the sense of community and the morality a small town vs. the closed universe of a ship  vs. religion.
All different but also have many things in common.

This book is an adventure story, romance, coming of age, a tale of war, love and lost rolled into one. The novel is brilliant, funny and heartwarming told through fabulous writing which beg to be savored. The closing paragraphs are what tie the book together and are a masterpiece all by themselves.

Great job by translators Charlotte Barslund and Emma Ryder – one of the best translated books I’ve ever read.

Synopsis:
Laurids Madsen goes off to fight the Germans along with other men of the town of Marstal in 1848. Laurids ends up on a boat which explodes and sends him up to the heavens, only to land in safely in his heavy boots, claiming he showed St. Peter his ass. However Laurids is lost to Marstal and abandons his family.

Albert Madsen, Laurids’ son sails in search of his missing father. Albert finds seedy company, warfare and a shrunken head. Upon his return Marstal begins to change rapidly as the women try and reclaim the men from the ocean.

Albert mentors the small boy Knud Eric who grows up to be a sailor as well, against his mother’s wishes. Through Knud’s eyes we see World War II, how he becomes a man and, together with other Marstal natives, fights the Nazis.

Published at I’ll Never Forget The Day I Read A Book!
BOOK BLOGGERS – Have you read “We, The Drowned”? If so link up your review below

We, The Drowned by Carsten Jensen