About:
The Polski Affair by Leon H. Gildin is an award winning, fictional book about a very weird and bizarre historical occurrence during World War II. The book is the story of one family of Holocaust survivors, takes place in present day Israel and Poland as well as through flashbacks. 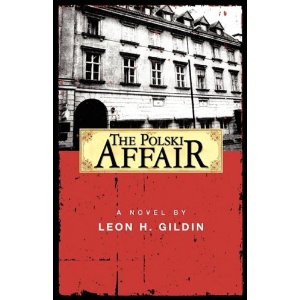 My rating for The Polski Affair – 5

Thoughts:
The Polski Affair by Leon H. Gildin (website) is a gripping, bizarre read and an emotionally provocative book. I have read many books about World War II, heard many strange stories but this one is one of the stranger ones, the fact that it actually happened boggles my mind.

I have never heard of The Hotel Polski and the bizarre scheme the Nazis were running there. The more I read about the whole issue, the more bizarre it became. Basically the Gestapo used the hotel to house Jews who had exit visas from Poland. But, the visas of dead Jews were sold to ones who managed to escape the roundups and hide in the Aryan side of Warsaw.

After the Jews came out of hiding, the Gestapo collected the money but many of the people were sent to their deaths. What makes the issue even strangers is that many of the visas were for South American countries which would have refused to recognize the passports anyway.

The characters are well written and the story moves along in a fast pace. There is many aspects to this book, promises broken, betrayal, heartbreak and several enlightening and happy moments. A page turner and a great pick for a book club.

Synopsis:
Rosa Feurmann found herself in the Hotel Polski in Nazi Occupied Warsaw as part of an investigation of Jewish partisans as to exactly what is going on in there. Rumors were afloat that rich Jews were able to buy their way to freedom using false documents. However, Rosa is detected by the Gestapo Colonel in charge of the hotel and becomes his personal servant.

Years later Rosa, now living under her new identity in Israel, is called to be a witness to the Commandant’s war crimes trial which causes her to relive her memories and reconcile her own conflicts.

BOOK BLOGGERS – Have you read The Polski Affair? If so link up your review below: