I am familiar with Professor Bar-Zohar’s writings, he is a leading Israeli writer on espionage. As most of his books, Mossad is also a fast paced, fascinating look behind thick curtains which have been previously closed. The authors’ analysis and insight are mesmerizing and usually spot on, while the new information they present, information that just recently has been uncensored, is simply amazing.

One of the most intriguing aspects of the book is not the spectacular successes, but the equally spectacular failures. Some of these failures are so astonishing one has to look at the cover to make sure the book is about the Mossad and not the keystone cops. Afterwards pounding ones head – “what were they thinking”.

Author Michael Bar-Zohar said that this is due to “The feeling is that we are the best in the world, and therefore a sense of Israeli amateurishness sometimes creeps into the system. This means they send people who are not as seasoned as they should be and they trust that they will not be caught and identified.” (http://www.haaretz.com)

That being said, the Mossad certainly has an extraordinary achievement record. That record though, coupled with classic Israeli self-assurance and overconfidence, can easily get smirched.

The book is divided into twenty two distinct chapters, each one a story of its own. The operations range from the complex assassinations of Syrian general Muhammad Suleiman, finding and assassinating rogue scientist Gerald Bull (he was developing a supergun for Saddam Hussein), the kidnapping Nazi Adolf Eichmann in Argentina and luring Mordechai Vanunu out of England into Rome as to not suffer the wrath of Thatcher.

Even operations which seem mundane, such as smuggling out of the Soviet Union of Nikita Khrushchev’s secret speech, or sneaking across the border Jewish Syrian women (the Syrian brides) gets an air of reverence and complexity. Other chapters include a run down of the years Israel’s greatest spy, Eli Cohen, spent in Syria as well as bringing the Jews of Ethiopia to Israel.

The chapter about the elimination of Black September’s leadership does not fail to mention the innocent Moroccan waiter, whose only crime was resembling Ali Hassan Salameh, one of the Mossad’s target. One of the biggest failures of the Mossad that we know of.

BOOK BLOGGERS – Have you read Mossad: The Greatest Missions of the Israeli Secret Service? If so link up your review below: 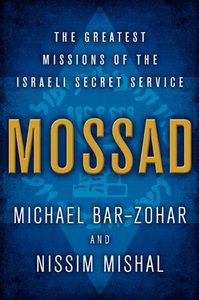