About:
The Last Gunfight: The Real Story Of The Shootout At The O.K. Corral – And How It Changed The American West by Jeff Guinn is a non-fiction book which traces the famous gunfight. The author cuts through the myth to tell the reader how wild the west really was. 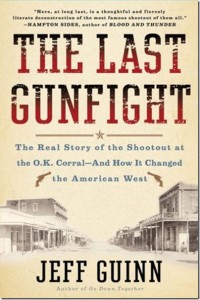 My rating for The Last Gunfight – 5

Thoughts:
When I saw the subtitle of this book I was immediately hooked. I never knew much about the shootout at the O.K. Corral, except what pop culture told me, and this seemed as good as opportunity as  ever to learn more about the subject.

Mr. Guinn doesn’t join the hero worship of the Earp brothers, but tries to tell the story through facts and research. The McLaurys weren’t the incarnation of evil, much like the Earps weren’t the epitome of all that’s good upon this good earth.

The author paints a picture of a rough life were justice was swift and a murder charge would most likely be overturned if the victim has been heard walking around town threatening you or your family. A place where men were men and women were wives, prostitutes or both.

Through private papers, personal accounts and earlier scholarly work, Mr. Guinn pieces together a fascinating account of difficult life in a difficult place. Spending time on the background of individuals, social implications and history the famous gunfight doesn’t seem anymore as the embodiment of good vs. bad,  but more as a result of local culture, misdirected pride and ambition.

As in any good book, fiction or non, a good story and characterization are what make the experience a unique on.  Doc holiday is dismissed in the book as a brutish man who believes he is on death’s door due to illness and is constantly looking for a fight. Ike Clanton is looked upon as a loud mouth. Wyatt Earp, a man portrayed by Hollywood as a person without blemish, is portrayed with his many faults.

Many things I didn’t know about the wild west, shattering myths and interesting tidbits such as how men really carried their guns, the misnomer about wild justice and even about the word cowboy.

Like his adversaries back in Wichita and Dodge, many hailed from Texas. But these weren’t drovers intent on a little wild fun. They dealt in cattle, too, but instead of herding them, they stole them. For that they acquired a generic nickname that eventually evolved into a complimentary description, but one that in 1880 was intended as a slur, a means of identifying men so low and violent that no evil act was considered beneath them:
Cowboys.

For me however, the most interesting part of the book was after the shootout, its legal repercussions and historical significance. The look at how the shootout was marketed, taken out of context by entertainers and made its mark on our culture is fascinating and alone worth the price of the book.

What happened to the legendary Wyatt Earp after the shootout could be its own book. Earp went on a manhunt to kill the people who murdered his brother (it wasn’t exactly legal back then either), sprinkling his own vigilante justice. For the rest of his life Wyatt stayed with the businesses he knew, prospecting, bars and whore houses (which didn’t impact his long marriage to Josephine). 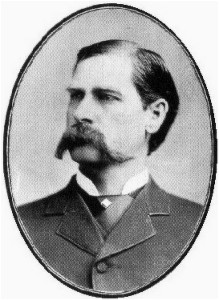 So tell me, what do you think about rewriting history? Do you print the better story?

Synopsis:
The gunfight at the O.K. Corral is ingrained in American culture and one of the prime examples of lawmen taking care of business. Only that the gunfight didn’t occur in the O.K. Corral, nor was it a defining moment in history.

BOOK BLOGGERS – Have you read The Last Gunfight? If so link up your review below: