About:
Elizabeth and Hazel: Two Women of Little Rock by David Margolick is a non fiction book about two ladies who were made famous by the press. The book looks history square in the eye and doesn’t flinch. 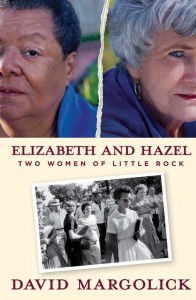 My rating for Elizabet and Hazel -5

Thoughts:
Elizabeth and Hazel: Two Women of Little Rock by David Margolick is an amazing book which is readable and thoughtful. Mr. Margolick managed to tackle tough issues with honesty and sensitivity which are rare in today’s world. 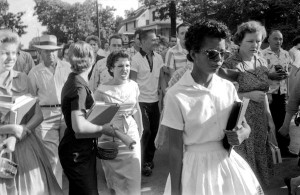 The picture captured a moment in time which shook the world. It had everything, a martyr, a villain and history. However, we still remember those two women, the dignified Elizabeth and the shouting Hazel as they were in September of 1957. Mr. Margolick finds out what happened after the picture was taken in a fair, even, honest and patient account.

The moment shaped Elizabeth’s future. She suffered tremendously from her instant fame, her abuse for years at Central High School and the aftermath of her brave brush with history. Hazel, on the other hand, was playing hooky from school and forgot that moment in almost an instant.

Years later, Hazel who realized what she has done called to apologize but it wasn’t until 1997 when the two women were reunited and formed a fragile bond. I cannot judge neither of the two. I cannot even imagine going through the hardships Elizabeth has endured or the mental anguish Hazel has had after being made, for years, the face of segregation.

The book has surprised me more times than I could count. For instance, the segregationist leaders abhorred the picture because it made them look bad, or the way Elizabeth and Hazel handled their individual and collective experiences over the years or even the way Oprah behaved.

This book has a lot to teach our society. It doesn’t see history in rose colored glasses, nor the present, nor the future. It presents things as they are, giving the reader food for thought.

Synopsis:
Elizabeth Eckford and Hazel Bryan were captured for posterity in a photograph by Will Counts. The picture which is a disgrace to the Jim Crow south struck chords in many people in American on many levels and still does so today.

However, the two women in the picture, Elizabeth Eckford walking in a dignified manner away from an assaulting Hazel Bryan, soon grew out of the picture, maturing and resenting the role which they were not prepared to play.

Zohar – Man of la Book
Disclaimer: I got this book for free.
Article first published as Book Review: Elizabeth and Hazel: Two Women of Little Rock by David Margolick on Blogcritics.

BOOK BLOGGERS – Have you read “Elizabeth and Hazel”? If so link up your review below: