About:
Dracula by Bram Stoker is a classic horror book written in 1897. The book was part of a genre called invasion literaturein which monsters tries to take over the United Kingdom. 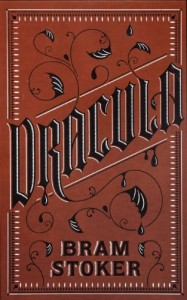 My rating for Dracula – 5

Part of the League of Extraordinary Gentle — Men of la — Book Challenge (Vol. 1)

Thoughts:
At first I didn’t think I’d like Dracula by Bram Stoker and I’m surprised at how much I did like it. The novel is composed of letters, journals, newspapers articles, telegrams and a chilling ship log.

The story is told through alternating view points, the only person who knows the whole story is Van Helsing – and that includes the reader. At the end of the novel you still don’t know if you missed something or if Stoker purposely left something out. While I can certainly see how that would bother people, personally I thought that was part of the genius of the book.

I was surprised at the many themes the novel touched, from sexual conventions, to immigration and from culture to colonialism and, of course, good vs. evil. The novel is extremely atmospheric as one would expect.

The role of Mina Harker was surprising at most, especially considering this is a Victorian novel. While virtue and innocence are unabashingly hailed, Mina assumes the role of a pious woman yet rise above her prescribed roles in society to become a partner with the men hunting the monster.

Yet my biggest surprise was Dracula. For being the title character he is found very little in the novel, yet his presence is on every page. How Stoker managed to accomplish that is a mystery and is simply nothing but astonishing. The Count is a strong character, he doesn’t give up, he doesn’t want to be understood or forgiven. The Count will destroy you unless you destroy him first.

Intelligent, well crafted and well written, the book reads as if it was written yesterday. It is just as relevant today as it was in Victorian times.

Synopsis:
An English solicitor named Jonathan Harker travels from England to meet Count Dracula in his castle in Transylvania to provide legal real estate support. Harker soon discovers he is a prisoner in the castle and noticed Dracula’s nocturnal life.
Harker barely escapes.

Soon after a Russian ship runs aground in Whitby, England. All the crew are missing, only the body of the captain is found. In the captain’s log there are tales of strange events which took place during the journey, leading to the crew’s disappearance.
A large dog is seen jumping a shore.

Later in England, Harker’s finacee Mina Murray and her friend Lucy Westenra are being tracked by Dracula. One of Lucy’s friends, Dr. Seward, is taking care of an insane man named Renfield who eats insects, birds and spiders to absorb their life force.

Unfortunately Lucy starts to waste away and Dr. Seward calls his old teacher Professor Abraham Van Helsing from Holland. Van Helsing recognizes Lucy’s illness but refuses to specify because he is afraid Seward will not believe his stories of vampires.

The doctors lose the fight and Lucy dies. Soon after, reports of children being stalked by a beautiful lady at night are being talked about. Van Helsing knows Lucy became a vampire. Together with Lucy’s suitors, Van Helsing tracks her and kills her.

Mina and Jonathan get married but Dracula learns of Van Helsing’s plot and takes revenge by feeding from Mina and making her drink his blood creating a spiritual bond. The group knows that the only way to save Lucy is to kill the Count.

Dracula flees back to Transylvania, pursued by Van Helsing and his group who are aided by Mina. Van Helsing goes to the Count’s castle and kills his brides. The rest of the group attacks the castle at sundown and kills the Count.

Zohar – Man of la Book
Disclaimer: I got this book for free.
*Ama­zon links point to an affiliate account
This post appeared in the Book Review Blog Carnival #83.

BOOK BLOGGERS – Have you read Dracula? If so link up your review below: