About:
Auschwitz: A Doctor’s Eyewitness Account by Dr. Miklós Nyiszli is a non-fiction memoir of a Jewish Hungarian medical doctor who performed “research” on other Jews with the evil Dr. Josef Mengele aka “Angel of Death”. This is not an easy book to read, but an important one. 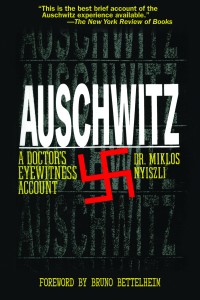 My rating for Auschwitz: A Doctor’s Eyewitness – 5

Thoughts:
Auschwitz: A Doctor’s Eyewitness Account by Dr. Miklós Nyiszli tells the sober first hand account of a doctor who was selected by Dr. Mengele, evil incarnate, to help him perform medical experiments in Auschwitz. Whether it was a blessing to survive the war or the live with the knowledge that you unwittingly helped the biggest criminals the world has ever seen commit genocide is something Dr. Nyiszli struggles with. Synopsis:
Dr. Miklós Nyiszli, a Jew as well as a medical doctor, was sent to Auschwitz when the Nazis invaded Hungary in 1944. Dr. Nyiszli – No. A8450- was picked by the monster himself, Dr. Josef Mengele, to perform “scientific research” on the inmates and eventually became Mengele’s personal research pathologist.