About:
“Anna Karenina” by Leo Tolstoy is a fictional book which was first published between 1873 to 1877 in the periodical The Russian Messenger. Even though the complete novel was published to mediocre reviews, others consider it the best realistic-fiction story written. 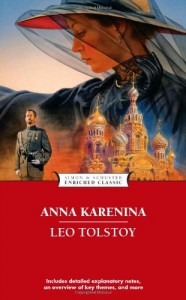 “Happy families are all alike; every unhappy family is unhappy in its own way”

This famous line starts the novel Anna Karenina by Leo Tolstoy (fun facts about his marriage), one of the most important works of world literature. Unhappiness is a private emotion, yet Tolstoy tries to make Anna Karenina’s unhappiness (or should the word actually be translated as miserable?) universal.

When I started reading the book two things immediately struck me. First is how readable it is and the second about the first line’s hypocrisy.

The translation flowed and Tolstoy’s story was, for the most part, interesting and engaging.  I was expect­ing nuances galore, hid­den mean­ings, bor­ing descrip­tions to no end etc. While the book is mul­ti­layer and does have nuances it does not inter­rupt the flow of the story which is how I felt about Thomas Hardy’s “Tess of the d’Urbervilles” (my thoughts).

The second was that despite the title of the novel, which is the name of the protagonist, the first line immediately declares that the book is actually about all families and not necessarily about a particular woman or men.

Unhappiness is a family affair as most of us know. This summer I started a new job and moved my family to a new state. We were all miserable together and individually. I was probably better off than the rest of the family, I had  job to go to, people to associate with and projects to keep my mind off the hardships at home. My beloved wife on the other hand wasn’t so lucky. We rented a house in a nice town but realized it was a mistake about a week in. The kids were bored to death, no TV for six weeks and Internet service which dates back to the early 90s.
So much for that – we moved after a month.

But enough about the first line…

Each character is unhappy in his or hers own way, but they are all connected to the point where “happy families” losses all meanings. There are no happy families in this book, Anna is bored with her marriage (to a good husband), Dolly chooses to turn a blind eye to her husband’s infidelities and Kitty… Kitty just wants a happy marriage.

On the surface, Anna Karenina seems like a typical soap opera. The characters are interrelated, romance, infidelities galore, longing, a sense of impending doom and the knowledge that love is life. It is as if Tolstoy is trying to tell the reader that love is the be all/end all and is what we should all strive for.

Upon further reading though we could tell that love brings pain and misery. Anna constantly lies to her true self, Kitty and Levin are in a complex, sometimes convoluted relationship, Dolly who chose her children over her happiness would be arrested for child abuse these days and probably back when the novel was published as well.

I felt the novel was a scathing criticism of Russian upper class society and aristocracy. It is obvious that Tolstoy did not approve of city life, organized religion and the class system among other social topics.

Tolstoy didn’t approve on biased based on gender either. Anna, the beautiful namesake of the novel, is rebellious and leaves her husband and son for true happiness. While I disagree with Tolstoy on this level about happiness, I did find the story interesting and tragic about the way the Russian upper crust treated a woman’s infidelity, removing her from their social circles without being able to fight the rigid norms which governed at the time.

I can see the importance and shock value of the novel for its time. Today we consider Tolstoy’s views as enlightened and his questions on reform, life and decadence timeless. But the novel is more than that, along with the profound statements it is also quality literature – a balance which is hard to strike.

Tolstoy had an interesting and conflicting life. As a person who was considered rich, he was also a critic of the system which he benefited from. I find that interesting, especially since it’s going on today. Almost everyday I hear on the news about some billionaire who is fighting to change they system which has gotten him/her to where they are.
Maybe it’s guilt, maybe they felt that by changing our dog-eat-dog super capitalist society (only for the rich that is) they will undo all the wrongs?

So tell me, which book have you been scared of reading?

Synopsis:
The book is divided into eight parts, consisting of mainly short chapters.

Part I: Prince Stepan Arkadyevitch Oblonsky (Silva) has been caught cheating on his wife Darya Alexandrovna (Dolly). In the midst of the chaos he reminds everyone that his sister, Anna Arkadyevna Karenina is coming to visit. Stiva’s childhood friend Konstantin Dmitrievich Levin (Kostya), an aristocratic landowner who chose to live in the country, is also arriving to propose to Dolly’s sister, the Princess Katerina Alexandrovna Shcherbatskaya (Kitty).

Meeting at the train station, Levin becomes infatuated with Anna. Later, Levin proposes to Kitty who clumsily turns him down. At the ball Vronsky dances with Anna who is shaken by her feelings towards him and leaves soon after. However, Vronsky is on the same train and confesses his love to Anna who refuses him.

Levin returns to his country estate crushed. Anna returns home only to realize that she is repulsed by her husband.

Part II: The Shcherbatskys take Kitty abroad, on advice of a doctor, because her health is failing, suffering from depression for turning Levin down.Kitty recovers but becomes extremely religious after she meets Madame Stahl and her adopted daughter Varenka.

Back in St. Petersburg Anna and Vronsky meet again, however this time Anna’s husband warns her to stay away from him. Anna realizes that she is pregnant with Vronsky’s child and confesses her affair to her husband who asks her to break it off, believing everything will return to normal.

Part III: Levin continues to work on his farm contemplating deep thoughts about falseness, agriculture reform and the relationship between labor, land and culture. Levin pays Dolly a visit who tries to explain Kitty’s behavior to him. Levin refuses to believe Dolly only to realizes he sitll loves Kitty once he gets a glimpse of her again.

Karenin is upset that Anna will not end her affair with Vronsky and threatens to take away her son if she continues.

Anna gives birth to a girl, Annie, and wants to leave with Vronsky on his military post. The couple leaves without Karenin giving Anna a divorce leaving Seryozha, Anna’s son, behind.

Part V: Levin and Kitty get married and go to live in Levin’s estate in the country. After several difficult months Levin finds out that his brother is dying. He wants to go visit him but is dismayed when Kitty wants to come with him. While Levin thinks his wife shouldn’t associate with the lower class, all Kitty wants is to support her husband. On the trip they find out that Kitty is pregnant.

In Europe, Anna and Vronsky are also having a difficult time. The couple cannot associate with Russians of their own class and Vronsky get bored of the situation. Returning to St. Petersburg, the couple realizes that Anna is barred from society.

Anna gets to visit her son on his birthday, but later gets snubbed at the theater by her former friends. Unable to find a place for themselves in St. Petersburg either, the couple goes to the country.

Part VI: Dolly goes to visit Levin & Kitty as well as Vronsky & Anna in the city. Dolly is surprised by the way Anna & Vronsky throw money around. She tries to convince Anna to get a divorce so she and Vronsky can properly marry, but Anna refuses.

Part VII: The Levin’s are in Moscow due to Kitty’s ailment. Levin gets accustomed quickly to the lifestyle and joins Stiva in gentleman’s clubs where drinking and gambling are the past time. At the club Levin meets Vronsky. Levin visits Anna and quickly falls under her spell. Anna cannot understand why Levin, with a young and pretty wife, would want her yet not Vronsky.

Anna users morphine to help her sleep due to the strain of the relationship she is in. Soon she becomes an addict.

Stiva visits Karenin to ask him about a military post and also about granting Anna a divorce. However, this divorce would require Karenin to lie and said he had an affair, Karnin gives Stiva a cryptic answer which he deciphers as a “no”.

Angry, confused, jealous and irrational Anna believes her relationship with Vronsky is over and contemplates suicide. Anna commits suicide by throwing herself in the path of a train.

Part VIII: Stiva gets the job he desired, Karenin takes custody of baby Annie, the suicidal Vronsky volunteers to go to war.

Levin realizes he loves his son just as much as he loves Kitty. After talking to a peasant, Levin comes to the conclusion that living a good moral life is the only reason to live. Levin also comes tothe conclusion that there are other religions besides Christianity that hold similar views on goodness and those are just as valid and acceptable.

BOOK BLOGGERS – Have you read Anna Karenina? If so link up your review below: