About:
Alone in Berlin by Hans Fallada is a fictional 1947 book describing the life in Germany under the Third Reich. The book’s title in the US is Every Man Dies Alone. 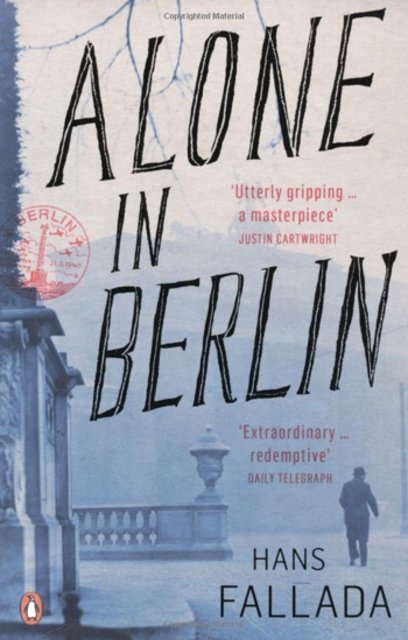 My rating for Alone in Berlin – 5

Thoughts:
Alone in Berlin by Hans Fallada tells the simple truth in minimal, yet descriptive prose. The book, it seems, is written from the edge of sanity by a man who knows what suffering is.

The author whose real name is Rudolf Wilhelm Adolf Ditzen (his nom de plume is a combination of Grimm Fairy Tale characters), a drug addict and brilliant novelist, who spent much of World War II in a Nazi insane asylum. He used the pretext of writing an anti-Semitic novel for the Nazi’s propaganda minister Joseph Goebbels to get preferential treatment.
The novel was never written.

The book is based on the true story of Otto and Elise Hampel, two middle aged workers who actively engaged in undermining the Third Reich. Their crusade included writing hundreds of post cards against Hitler and his cronies leaving them all over Berlin. The campaign wasn’t very successful as most of the postcards, when found, were immediately turned over to the Gestapo but it did embarrass authorities for two years.

The novel that tells of the postcard campaign but also about the larger picture in Berlin, or more specifically the occupants of 55 Jablonski Strasse. The building’s occupants include the elderly Mrs. Rosenthal (the last Jew), a judge, a post office worker and her no-good ex-husband who has a breakdown after realizing what her heroic son really does in the SS, a government snitch and his prostitute wife and a family of official Nazis.

Fallada introduces the reader to a world where fear and terror rule and the dread of being snitched upon is on everyone’s mind. The characters are complex, well written and three dimensional. The heroes and villains in this novel are shown with all shades of gray. Fallada just tells a story as honestly as possible without coloring it in false shades.

What I loved about the story is that there aren’t absolutes in it. The good guys have their faults, the Nazis have their merits.
If anything, this is a story about circumstances.

Even today, with tons of research the world still struggles to decide whether or not the Germans under the Nazi regime were acting as human beings or an evil mob. This is, of course, a catch-22. if they were human beings then the responsibility doesn’t fall only on the people, but also on circumstances. Call them an evil mob and you exonerate the humans.

Alone in Berlin is a novel for anyone who ever asked “what would I do if I were there?” The novel doesn’t give answers (no great novel does that) but gives you a lot to think about.

Books in sim­i­lar vein:
Field Gray by Philip Kerr
The Silent Oli­garch by Chris Mor­gan Jones
Shad­ows Walk­ing by Dou­glas R. Skopp
So tell me, what would you do (no judgments, I often ask myself that questions and my family’s safety always wins)?

Synopsis:
Otto and Anna Quangel receive the worst news parents can get – their only son died in the war. Feeling frustrated against the Nazi machine they decide that they must act in defiance. However, acting in defiance is a sure death sentence.

Together they write and distribute postcards which call for action against the Reich. They manage to allude the police for two years thinking they are making a difference.

BOOK BLOGGERS – Have you read Alone in Berlin? If so link up your review below: