About:
The Sweetest Fruits by Monique Truong is the imagined story of three women who were all attached to Greek-Irish writer Patrick Lafcadio Hearn.  Ms. Truong came to the US as a refugee from Vietnam, and is an award winning, bestselling author. 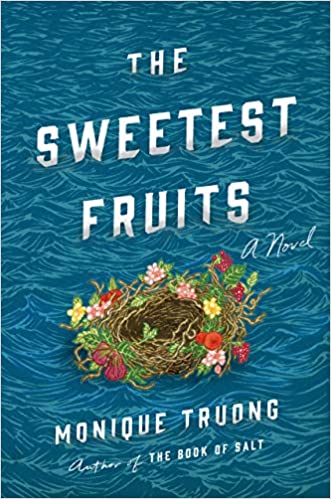 Thoughts:
I knew nothing about Patrick Lafcadio Hearn, I actually only found out he was a real person after finishing to read this book. The Sweetest Fruits by Monique Truong is the author’s attempt to tell the readers about the Greek-Irish writer through the women who knew him throughout his life, through their words, acts, and deeds.

The book has its ups and downs, the last third took a bit of concentration and perseverance, but overall I though that the writing was witty, and the narrative sharp. The author does not shy away from showing the humanity and flaws in the women who tell the story, as well as Mr. Hearn who had a tremendous impact on each one of their lives.

I almost skipped this book because the synopsis made it seem like it would be a history of one of those “great men” no-one had heard about. Instead we get different view points of what made Mr. Hearn’s voice so memorable to his fans, through tales from the women who fell by the wayside, but have had as much an impact on the writer as he had on himself.

What I thought was remarkable is that the author did not make Mr. Hearn the villain, nor the antagonist even though the story is told through the eyes of the women who loved him, the ones he loved back, and did wrong during his life. The author simply implies that due to childhood disability and dark skin he can relate to people who were marginalized at the time, and some are still marginalized today.

Frankly, I had no sympathy for Hearn, I am not familiar with his work and – even though I don’t think it was the author’s intention – he comes off as a jerk, arrogant, and even cruel. Even though Mr. Hearn is the focus of the book, the women telling it, survivors one and all, are the ones to give the reader insight.

Synopsis:
The novel is divided into three parts, three women talking about their relationship to Lafcadio Hearn. The first is his mother, a Greek woman who married an Irish officer in the British Army to get out of her father’s house. She followed her husband to Ireland, only to be forced to leave him.

The second, a former slave, an African-American woman from a Kentucky plantation. Making her way to Cincinnati after the Civil war working at a boarding house cook. At the boarding house she meets, and marries Hearn who is trying to make his name as a reporter.

The third, a Japanese woman named Matsue who got married to the new English teacher… Mr. Hearn. Matsue, a samurai’s daughter, gives birth to four children and collaborates with Hearn in his literary ventures.