About:
The Dispatcher by Ryan David Jahn is a fictional thriller which takes the reader from Texas to Arizona. I could not put this book down, it moves fast and furious. 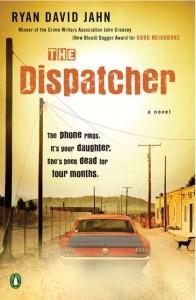 My rating for The Dispatcher – 5

Thoughts:
I could hardly put down The Dispatcher by Ryan David Jahn (website). The first chapter, where Ian Hunt answers a 911 call only to realize he is talking with his daughter who was kidnapped several years before was the perfect start to this exciting book.

Reading this book I had a clear image of a Coen Brothers / Quentin Tarantino movie in mind. The characters are gritty, well defined and for a few pages I thought I could even smell them. The scenery, consisting mainly of the desert, is perfect and the plot is tight and moves fast.

This is a story about a man doing everything possible to save his 14-year-old daughter from a weird couple. Mr. Jahn manages to create an atmosphere of tension and unpredictability as sustaining that sense for the majority of the book.

The plot is told from a view point of three people, Ian Hunt, his daughter Maggie and her abductor. The fury of this book and the fear which the authors manage to capture somehow justify the twisted logic many of the characters have.

The grief that Ian feels after his daughter been abducted is heart wrenching, we watch Ian’s life and family fall apart. We are witnesses to the way he destroyed his relationship with his teenage son and Ian’s weak attempts to resurrect it.

Maggie, fourteen and abducted for several years, is a spunky girl who has nothing to lose. The character’s strength was admirable and filled with desperation.

Henry simply wants to make his wife happy – otherwise he is a total scumbag. The most fascinating part of this book was giving this monster or a man some human qualities.

Many books are about the relationship children have with their mothers, but this one is about a father and daughter. Maybe that’s why this book really hit all the right cords with me. I couldn’t imagine anything happening to my daughter and I know I’ll go to the ends of the earth for her (despite that she has been a bit fresh lately / 7 going on 17).

The Dispatcher is a modern day western, a battle between two men protecting their families.

Synopsis:
Dispatcher Ian Hunt wears a uniform but does not consider himself a police man. One day Ian answers a 911 call only to realize he is talking to his daughter who has been abducted from his home seven years before.

Going on a bullet ridden chase from Texas to California, this macabre, violent ride in a 1965 Mustang will pit a man against himself, the dessert, the law, the abductor and anything that comes between him and his daughter.

BOOK BLOGGERS – Have you read The Dispatcher? If so link up your review below: